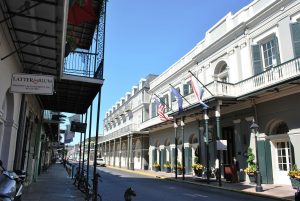 After two hundred years, a blazing fire, a suicide, and a deadly Yellow Fever epidemic, one wouldn’t expect anything less than a haunted nightmare. The Bourbon Orleans hotel is exactly that, but also offers a dose of luxury along with the haunts. First opening as the Orleans Ballroom and Theatre in 1815, it was a place for the socialites of Louisiana Creole society to have their luxurious ballroom dances. It was known for the occasional Quadroon Balls, where wealthy Creole men would engage in secretive affairs with Quadroons, or women of partial African ancestry. The Orleans Ballroom and Theatre was later bought out by the Sisters of the Holy Family, the first Black order of nuns. The building then served as a school and orphanage for young Black girls called St. Mary’s Academy. It was during this time that one of the worst outbreaks of Yellow Fever took the lives of several children and nuns. By the 1960s, the Sisters of the Holy Family had grown to several hundred members and had begun to outgrow the building. They sold the hotel in 1964, and the Bourbon Orleans was born. Today, the hotel provides guests with all the modern luxuries they could ask for while giving them a taste of the real New Orleans. A view of the French Quarter, a balcony over Bourbon Street, and of course, ghosts! The Bourbon Orleans is said to be home to nearly 20 spirits, many of them children who died of Yellow Fever back when the building was a convent. There’s also the ghost of a Confederate soldier who walks the halls of the hotel, as well as a woman seen dancing under the chandeliers of the Orleans Ballroom. Rumors also say that a nun committed suicide in Room 644, and her tortured screams can still be heard to this day.

Louis Tabary was the theatre manager for the nearby Theatre St. Pierre. Unfortunately, structural issues forced St. Pierre to close its doors for good. Tabary then envisioned another, more grandiose theatre nearby, the Theatre d’Orleans. Construction on the theatre began in 1806, but the War of 1812 stalled its construction. It didn’t open to the public until 1815.

The Orleans Theatre was an exclusive club meant for the high society of Louisiana Creole. The theatre mainly hosted French Operas. The fun came to an end in 1816 when a fire destroyed the building, but entrepreneur John Davis was set on keeping the fire alive (pun very much intended).

Davis bought the land under the burnt building and hired architect Henry Latrobe, the man who designed the US Capitol building, to construct his theatre. This time, Davis wanted to add a ballroom. In 1819, the Orleans Theatre and Ballroom was complete.

The venue hosted numerous festivities, including the infamous Quadroon Ball. Wealthy and influential Creole men would attend the ball in search of love affairs with Quadroon women, or women of partial African ancestry. They attended the ball in secret to hide the fact that they were chasing women of color.

In 1828, a fire burned down the old Capitol building, forcing the state legislature to move their operations into the ballroom. Rumor has it that Andrew Jackson announced his bid for the presidency in the building.

St. Mary’s and the Sisters of the Holy Family

In 1842, Henriette DeLille founded the Sisters of the Holy Family, America’s first and oldest order of Black nuns. Starting with just twelve other sisters, the congregation grew to encompass over 150 other nuns by the end of the century. In 1881, the quickly growing congregation saw an opportunity when the Orleans Ballroom was put on the market. The building became St. Mary’s Academy and served as the sister’s motherhouse and a school for young Black girls.

The adjacent Orleans Theatre was treated as a separate building and became a vaudeville theatre called Signor Faranta’s Iron Theatre. The theatre was successful until the building caught fire. The Sisters of the Holy Family bought out the lot and built St. John Berchman’s Asylum for Negro Girls, which served as an orphanage. They built a courtyard and playground for the girls, which today exists as the courtyard and pool for the Bourbon Orleans.

By the 1960s, the Sisters of the Holy Family expanded to over 400 nuns, outgrowing St. Mary’s. They sold the property and moved to a larger convent in East New Orleans, where they still are today.

The Bourbon Kings Hotel Corporation bought the property from the Sisters of the Holy Family in 1964. They spent over $7 million to restore the Orleans Ballroom and built a new building on the site of the old orphanage. The ballroom was converted to the lobby, dining room, and bar.

The Bourbon Orleans Hotel is one of New Orleans’ most historic hotels, located right on Bourbon Street. The hotel offers beautiful views of the French Quarter and the St. Louis Cathedral, along with classic New Orleans balconies. Guests will also have all the modern amenities of a luxury hotel, including a swimming pool, WiFi, flat-screen TVs, and a gym.

The Haunts of the Bourbon Orleans

The Bourbon Orleans is often touted as one of the most haunted hotels of New Orleans. At least 20 ghosts are said to reside in the hotel, many of which are the victims of Yellow Fever from the days when the building was a convent. Guests are most likely to encounter four main apparitions in the Bourbon Orleans.

The ghosts of the Yellow Fever victims are the spirits of children and nuns who perished in the worst of the city’s epidemics. The nuns cared and prayed for children who contracted the disease during the epidemic. Even with the care of the nuns, several children lost their lives. Their spirits never left the building. The apparitions of children praying and nuns watching over them have been seen by guests and staff. Guests have reported hearing the laughter and pitter-patter of children playing in the halls, and some claim to feel the children tugging on their clothes. The ghost of a little girl chasing after her ball is often seen on the sixth floor.

Room 644 is the most haunted room in the Bourbon Orleans. They say a nun committed suicide in the room, a rumor which hasn’t been confirmed nor denied by the Sisters of the Holy Family. Guests and staff report hearing bloodcurdling screams from the room at night. Some say it sounds like someone is being tortured in the room, with horrifying cries and screams echoing through the halls. Guests who stay in Room 644 often report being woken up by a nun standing over their bed in the middle of the night.

The ballroom of the Bourbon Orleans is haunted by the spirit of a woman who is seen dancing under the chandeliers. She dances by herself, but her form indicates the presence of an invisible dancing partner. Staff also claim that she hides behind the draperies when she’s not dancing, and she often shuffles them around to get a rise out of the guests. Some even claim to see a pool of blood on the ballroom floor, rumored to be a remnant of a duel between two Creole men who had an argument over a woman. Whether or not the woman under the chandelier is the one who they fought over has yet to be determined.

The ghost of a Confederate soldier has been seen walking the halls of the hotel. He pays no mind to the guests, though he attracts attention with his heavy limp, tattered clothes, and open flesh wounds. He’s most often seen on the third and sixth floors.

New Orleans is the crème de la crème of haunts in America. Many say the city is home to vampires, werewolves, and secret societies that practice magic. While that may or may not be true, we do know that the city is full of ghosts! If you’re visiting the French Quarter, make sure to visit some New Orleans classics like the Old Absinthe House. The ghost of pirate Jean LaFitte is said to have phantom parties with his cronies in the upstairs section of the bar. You can also catch the spirit of Marie Leveau having a drink, romantically staring out of the second-floor window. Le Petite Theatre might be one of the most haunted buildings in the city, with at least 40 ghosts roaming about. The most common apparition is that of the Union soldiers, who march around the building as if they own the place. Some guests have also taken hazy photos depicting human-like beings floating around the building. Don’t forget about the UpStairs Lounge! The UpStairs was a thriving gay bar and a safe space for the LGBTQ community in New Orleans in the 1970s. But it all came to a tragic end when the bar was set on fire in one of the worst hate crimes the gay community has ever seen. Thirty-two people lost their lives that night, and their ghosts live on, hoping to one day bring awareness to the little-known tragedy. Want to see more haunted New Orleans? Check out the top ten most haunted spots in the city right here!