Guests at the Saint Louis No. 2: Sisters of the Holy Family

History of the Sisters of the Holy Family

Originally called the Congregation of the Sisters of the Presentation of the Blessed Virgin Mary, this order of African-American nuns was founded in 1836 by Henriette DeLille. The name changed to Sisters of the Holy Family in 1842. DeLille was inspired by the work of Sister Marthe Fontier, who was a member of the French religious order Dames Hospitalier. In 1829, DeLille, along with Juliette Gaudin, a Haitian woman, and Josephine Charles began to evangelize free people of color and slaves in New Orleans. Seven years later, they founded New Orleans’ first confraternity of women of color, and would later found a school for girls. The Religious of the Sacred Heart provided the three women with the experience of formal religious communal living and spiritual formation. In 1852, DeLille was named Mother Superior by the congregation’s advisor, Father Etienne Rousselou. Although she took the name Sister Mary Theresa, she was affectionately called Mother Henriette.

Today, they are a congregation of the pontifical right. In 2015, they had 96 sisters. They still continue their missions for caring for the elderly and sick and educating today’s youth. Their missions have expanded from New Orleans, Louisiana to Texas, California, Washington, D.C., and Belize in Central America.

Henriette DeLille was born in New Orleans, Louisiana in 1813 to a free woman of color named Marie-Josèphe Días and to a Frenchman named Jean-Baptiste Lille Sarpy (var. de Lille). She was what’s known as an octoroon, a person who is one-eighth. Her mother was in a plaçage. A plaçage is a civil union between a man of European descent and a free person of African, Native American, or mixed-race descent. The women were not recognized as legal wives, but often had a contract with the man that settled property and in some cases, freedom of the children if the mother was a slave. DeLille had other siblings, including a brother named Jean DeLille. DeLille’s mother taught her French literature, dancing, and music. She was also taught nursing and using herbs for medicinal purposes. Rather than being drawn to white men for a plaçage marriage, which she was groomed and raised for, DeLille preferred the Roman Catholic faith she was raised in. She turned to her religion rather than men, although it is known that she mothered two sons when she was a teenager. Both sons were named Henry Bronco; it was a tradition to name a son after his father, and should the son die, the next would also be named for the father and so on. However, neither son survived infancy. DeLille believed that the plaçage system violated the Catholic sacrament of marriage, and her refusal to participate in the system strained her relationship with her family. Her family listed themselves as white in the census, since their skin was light enough to pass for white, but DeLille listed herself as a free person of color. This caused even more strife between herself and her family, as it exposed their heritage. Her brother, Jean, became so estranged from DeLille that he moved to Iberia Parish, Louisiana.

Sister Marthe Fontier was a major influence in DeLille’s life. Fontier had opened up a school to educate colored girls called St. Claude School. At just 14, in 1827, DeLille began to teach at the school, much to the dismay of her family. Seven years later, she was baptised and fully recognized by the Catholic church.

Unfortunately, DeLille’s mother had a nervous breakdown in 1835 and DeLille was granted all her mother’s assets. She sold most of it, but used some to care for her mother. She used the proceeds to open the Sisters of the Presentation of the Blessed Virgin Mary in 1836, which became the first Catholic home for the elderly in America.

In 1837, Father Etienne Rousselon had the congregation formally recognized by the Holy See and DeLille named Mother in the order. The topic of her sons came up, but the Church decided it didn’t matter since it was prior to DeLille’s choice to join the church. The name changed in 1842 to Sisters of the Holy Family. They continued their service to the poor and elderly and were intent on educating women of color and slaves, despite the laws that would put them to death or in prison for doing so.

On November 16, 1862, while Union troops occupied New Orleans, DeLille died. Her death was attributed to a life of hard work and charity. Upon her death, she had the recognition of holiness. In 1988, the order worked to have DeLille canonized with the Holy See and in 1997 she was unanimously endorsed by the United States Catholic bishops. On March 27, 2010, she was declared Venerable by Pope Benedict XVI. The Congregation for the Causes of Saints gave its assent on June 22, 2010, for the commencement of beatification with a declaration of “nihil obstat” (nothing against). This gave DeLille the title of Servant of God. A claimed miracle by her was being investigated in 2005 and by 2017, other miracles attributed to her were under medical scrutiny. In 2001, Lifetime Movies made a film about her entitled The Courage to Love.

DeLille is remembered as one of the first Creole woman to be nominated for sainthood. Her lifetime of servitude and dedication to the women, elderly, and poor of New Orleans is forever remembered through the actions of the Sisters of the Holy Family and those who succeeded her. The congregation continues their mission in several places around the country. 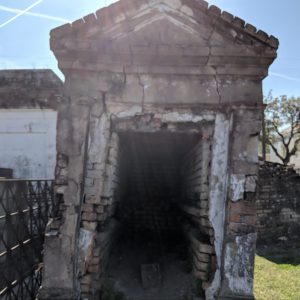 Click To Join Our Haunted Monthly Newsletter! Stay updated on stories of hauntings and intrigue!