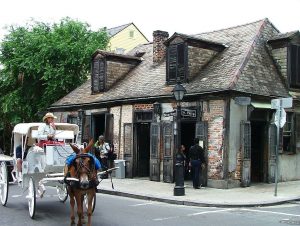 A big thing you have to understand about the hearty lads and corsairs that used to love to Crack Jenny’s Teacup on every port is that some of that gangplank gangsters were bankrolled by the state. Back when lad, lass, lassie, and landlubber alike prowled the mighty misty blue mistress the crowns were bickering like the houses in Game Of Thrones. Peace, peace was a pipe-dream. War was the day to day baseline. Some turns of the clock you had a bit more, some a bit less, but all in all you had to be ready to eat a rat or two cause’ “pop, will this siege ever end?” And the crowns, that loved to knead and prod’ each other even when it was “peace-time”, didn’t have enough able body seamen. They had to improvise. So, what those crafty knaves in power did was hand out Letters of Marque. Letters of Marque were Government-issued papers allowing privateers the right to piracy of another ship during wartime… a vessel flying the flag of an enemy country. In essence, it made Pirates more or less legal. If Jack Sparrow had been a good boy, to a degree, with his country of allegiance then all he had to do was apply for a Letter of Marque and, well, Bob’s your uncle. So, when we say, in the article, privateer, what we’re saying is Pirate, scallywag, swashbuckler, rum-runner, Jolly Jack of the sea. And, in the states, one of the most famous privateers was Jean Laffite.

Lafitte’s Blacksmith Shop, where you can get a handle on the history of this gun-for-hire, is a well-known building at the corner of Bourbon Street and St. Philip Street in the French Quarter of the Big Easy.

The joint was most likely constructed as a residence in the 1770s during the Spanish colonial period. It is one of the oldest and coolest surviving structures in that happening, creole, jazz playing, food smacking, town.

But, what makes the whole building such a tourist trap, I mean attraction? Why John “Jean” Laffite. The story, legend, historical account, rancor rambling – history is like that, full of maybes – states that the famous privateer owned a business there in the early 19th century. Jeans’ life is full of plot-holes, it’s shrouded in mystery, and half the time you feel like that kid from Big Fish – “dad, stop blowing smoke up my…” The business, the scallywags say, was a front for Lafitte’s “criminal” enterprise. The man plotting his raids, his illegal seizures, and his madcap contraband operations from the shop.

Even the name Blacksmith Shop may not be coincidental; it might have been code as to the “black” deeds performed there. As a way to maintain its cover, Lafitte’s goon squad may have run a smithy here during the days of dependence upon horses. Jean’s older brother Pierre Lafitte was a well-known blacksmith.

The current patron traces its origins to Roger ‘Tom’ Caplinger. Tom, in the mid-1940s, adapted the old abandoned shop into Café Lafitte. The cafe matured into a trendy nightspot that brought a bohemian trade, including the gay community and stars like Noël Coward and Tennessee Williams.

Nonetheless, poor old Tom, never held the deed to the estate, and the cafe was sold in 1953. Tom, then opened another business, named Café Lafitte in Exile, a block away. It’s not, although some mistake it as, Lafitte’s dwelling… it is, nevertheless, one the oldest gay bar in the U.S.

Jean Lafitte – a life of chasing skirt and booty.

Jean Lafitte (1780 – 1823) was a French buccaneer and privateer who pillaged and plundered in the Gulf of Mexico in the early 19th century. He was a charming marauder and the scourge of the high seas. Lafitte lived in a time when all hell was breaking loose in the Caribean. The Colonies had revolted, Slaves in different islands were hanging their masters by the throat, the English were fighting the Spaniards, the Spaniards were fighting the Yanks, the Yanks were fighting the English, everyone was watching the world burn and asking where they could get some marshmallows. It was a chaotic period and Lafitte knew how to exploit it.

Lafitte is thought to have been born either in Basque-France or the French colony of Saint-Domingue. By 1805, the crafty Lafitte was managing a small warehouse in New Orleans; the man organizing ill-gained booty and laundering smuggled goods for his brother, Pierre.

Everything was going gangbusters until The US government passed the Embargo Act of 1807. The Lafittes transported their operations to an island in Barataria Bay, Louisiana. By 1810, their new port was breaking bank; it had become one of the most successful smuggling operations and clandestine business in the area. During this time is when Jean decided to turn his illegal activities up a notch… He started rubbing elbows with pirates.

Then the whole operation went belly up. By now Lafitte was a rather famous pirate. One summer, a United States naval force successfully invaded the port/island and the whole cabal was captured.

Here’s where Jean Lafitte does the Corleone shuffle – “I want a legal business” – and becomes a constitutionally sponsored pirate.

General Andrew Jackson needed cutthroats to defend the Big Easy at the Battle of New Orleans during the War of 1812. Guess which ragtag brother duo he called in… After securing a victory, Jackson paid a fee to the Lafitte brothers’ efforts and officially called them privateers.

From then on, the brothers were under the employment of Uncle Sam… Or whichever government was fronting the bill. They became mercenaries playing all the fields. And they were so good at raising hell that their employers didn’t really care that they would frequently freelance for the competition.

The Lafittes became spies for the Spanish during the Mexican War of Independence. In 1817, Jean established a new colony on Galveston Island named Campeche; a colony that at its height made more than a million dollars annually from stolen or smuggled coin and goods. Lafitte continued attacking merchant ships as a pirate/privateer all over the gulf until 1823.

In February 1823, Jean Lafitte was sailing south near the town of Omoa, Honduras, on his schooner General Santander. Omoa was the site of the biggest Spanish fort in Central America; the behemoth was constructed to safeguard the Spanish silver shipments from the mines of Tegucigalpa to overseas destinations. Lafitte started to salivate… and, well, to say he bit more than he could chew would be underselling the colossal faux-pass.

Lafitte endeavored to take what seemed to be two lowly Spanish merchant ships on the night of February 4. It was overcast with little to no clarity. The Spanish ships seemed to be fleeing but, at the last second, turned back and went all medieval on Lafitte’s schooner. The ships, were in fact, playing possum and by the time Jean Lafitte realized his miscalculation, the boats had opened fire. Each one, it turned out, was a heavily armed warship.

Lafitte was blown out of the water. Jean Lafitte died just after dawn on February 5. He was given a traditional naval burial; thrown overboard to Davy Jones locker.

There are all manner of crazy tales about the shop/bar. Everyone in the district has one story or another to tack onto the property. The biggest one…

Just before Jean left for his trip to Honduras, the man – rascally tongues profess – buried his booty, plunder, ill-gotten goods somewhere in the property. That’s right, for all intents and purposes there might very well be actual pirate treasure at Lafitte’s Blacksmith Shop.

Legend has it, and dozens of eye-witness accounts might confirm, that a pair of devilish red eyes can be seen staring out of the cracks in the wall, or the fireplace grate, whenever someone comes down to the cellar in search of the gold.

Others have reported that the spirit of the pirate haunts Laffite’s Blacksmith Shop. The ghost roaming the halls and causing a raucous whenever a Spaniard or Federale enters the shop.

For more macabre tales check out our blog.