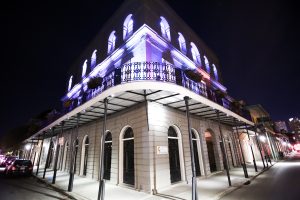 We would like to give our readers a fair warning: the stories you are about to read are graphic in nature and are not for the faint of heart. Reader discretion is advised.

It’s unclear whether there was evil here before or after the LaLaurie Mansion’s construction finished, but frankly, it doesn’t matter. What’s here now is a terrorizing, haunted, and sinister place known simply as the Haunted House of the French Quarter: the most haunted location in New Orleans.

The History of the LaLaurie Mansion

For nearly two centuries, this infamous grey mansion has fascinated and terrified residents and visitors in New Orleans. The 12,000 square foot mansion was built in 1831 for Marie Delphine Macarty LaLaurie, and her third husband, the French-native Dr. Louis LaLaurie. Together, Louis and Delphine were the toast of New Orleans society. Or so everyone thought… until a fire exposed their dark and disturbing reality.

The LaLauries were renowned for the extravagant parties and lavish entertainment hosted in their mansion. Many considered Mrs. LaLaurie gentle and sweet, and her younger husband a well-known and respected doctor. Unbeknownst to the upper class society of New Orleans, they were anything but gentle and kind.

The mansion’s long and horrific history first erupted into public view on the night of April 10, 1834. Delphine and Louis were hosting one of their renowned parties that night. The house was filled to the brim with revelers. The grand, wonderful evening came crashing down when a fire broke out in the kitchen that quickly spread to the slave quarters.

The LaLauries were completely unconcerned, assuring their guests that the building was empty. They directed their guests and slaves to bring all the home’s finery out into the streets to keep it from burning. The band set up in the street and the drinks and party continued while the slave quarters burned.

Turmoil and Tragedy in the Slave Quarters

Eventually, some of the guests grew concerned about the possibility that some slaves may have been trapped in the quarters. Brushing past the LaLauries and their crude objections, they burst into the slave quarters. Smoke billowed into the streets as one by one, slaves stumble out of the building and revealed the horrid conditions they were kept in.

Beaten and starved by the LaLauries, a dozen or so mutilated slaves gathered on the sidewalk on Hospital Street, to the horror of the guests still assembled outside. The slaves’ bodies were bruised and broken, bearing the marks of whips and other torture devices. One man even had a hole in his head; maggots crawled in and out of his brain through it. While their guests were distracted by the hellish scene unfolding on the street, Delphine and Louis slipped back into the home and locked themselves inside.

When the fire department arrived, they discovered an elderly slave woman bound in heavy chains to the hearth in the kitchen. She confessed to setting the fire as a suicide attempt to escape punishment from Mrs. LaLaurie in the upper room. She led the men to a heavy oak door with no handle at the top of a narrow staircase inside the mansion.

When they finally got past the resistant Madame LaLaurie, they forced the door open and proceeded to the attic to check for any new sources of fire or even embers that could still set the home ablaze. They were overcome by the stench of rot, decay and death.

According to an excerpt from the New Orleans newspaper The Bee, given the next day on April 11, 1834

“…the doors were pried open for the purpose of liberating them. Predisposed to taking this liberty, (If liberty it can be detailed) several gentlemen impelled by their feelings demanded the keys, which were refused them in a gross and insulting manner.

Upon entering one of the apartments the most appalling spectacle met their eyes.

Several slaves more or less horribly mutilated, were seen suspended from the neck, with their limbs apparently stretched and torn from one extremity to the other. Language is powerless and inadequate to give a proper recollection of the horror, which a scene like this must have inspired. We shall not attempt it, but leave it rather to the reader’s imagination to picture what it was!

The slaves were the property of the demon in the shape of a woman whom we mentioned in the beginning of this article. They had been confined by her for several months in the situation from which they had thus been rescued and had merely been kept in existence to prolong their sufferings and to make them taste all that the most refined cruelty could inflict. But why dwell upon the particulars! We feel confident that the community share with us our indignation, and that vengeance will fall, heavily full upon the guilty culprit.”

The Barbarism of the LaLauries

Some believe that Dr. Louis LaLaurie and his wife were conducting horrific medical experiments on the slaves.

According to accounts, the victims were men, women, and children, and included a caged woman who had her limbs broken and set at unnatural angles so as to resemble a crab; a mutilated sex change operation; a woman whose limbs were removed and odd circular pieces of skin removed to resemble a human caterpillar, and some had pieces of their faces removed to resemble gargoyles. Seven were suspended from their necks and were badly mutilated. Two of these survivors died shortly after their rescue.

The End of the LaLauries

Four thousand angry residents quickly gathered into a lynch mob, demanding the blood of the LaLauries for their heinous acts. They grew more agitated as they searched for the LaLauries, unable to find them.

As it turned out, the couple escaped to the docks and boarded a waiting vessel before the mob could find them and left their servant, who had participated in the tortures, to face the fury of the mob. The LaLauries escaped to France, where Delphine lived the rest of her days in a luxurious apartment in the heart of Paris. She died nearly two decades later in 1853, interred, at least temporarily, in the Montmartre Cemetery in Paris. Delphine’s spirit, though, did not rest peacefully for long.

After the mob realized the LaLauries had fled, they tore apart the mansion, leaving it in total disrepair.

There it sat, a hulking ruin, for decades. Almost immediately, the mansion became the scene of ghostly tales, as people reported hearing the tortured shrieks of the LaLauries’ mistreated slaves echoing through the streets surrounding the home. In the 1850s, the mansion was refurbished, but it would never shake the curse of the events that had transfixed the city of New Orleans.

Owner after owner would come to ruin, with none seeming to last more than a few years at most. Soon, no one wanted to reside in this once-grand and glorious mansion. By the 1870s, the mansion was cut up into dozens of tenement apartments, mostly occupied by immigrant dock workers and their families.

Their children immediately began to hear unexplained moans and groans. Disembodied screams, burning human flesh, dragging of chains, and scratching noises under the floorboards would bedevil the children’s sleep. Their parents experienced none of these mysterious phenomena, and wrote it off as simply their children’s overactive imaginations. It is fairly common knowledge that children are much more attuned to the spirit world, perhaps because their minds are more open.

However, this all changed when an immigrant dock worker came home late one evening, and found his way up the stairs blocked by a large black man bound in chains.

He screamed at the man in his native tongue to move, and when the apparition did not budge, he used his hands to push the figure out of his way. His hands passed right through; the spirit dissolved into a cold mist. By sunrise, the mansion was empty once more, as all its residents fled in the night.

It appears on postcards of the city as early as the 1880s, labeled as “The Haunted House of New Orleans.” People spending the night in the home report waking in the middle of the night to find a woman with long, red hair glaring down at them as they slept. This same figure is reported by passersby on the streets below, seeming to stare right through them as they walk by. Many believed this was the spirit of Delphine LaLaurie, returned to New Orleans when her children had disinterred her remains in Paris, returning her bones to her native soil once more.

The turn of the last century saw dozens of horrific tales become associated with the mansion. One such story states that, in the moments before the LaLauries fled the city, they pulled up the floorboards in one of the upstairs bedrooms. There, they shackled a dozen or more of their servants, still alive, with their mouths sewn shut. When their muffled moans and the clanking of their chains were heard, the noise was assumed to be ghosts. Their remains were discovered decades later during a renovation of the home. It would become the repository of all the worst that humans could imagine other humans capable of.

This notoriety makes the building something of a prized possession, but, like the Hope Diamond, its beauty and majesty seem to exact a painful price. One owner after another comes to a bad end. One opened a “haunted pub,” which he was forced to close a few short years later. Shortly before this, he bequeathed the house to its last documented spirit. A suite upstairs was rented to a curious old man who died just days after moving in, and among his belongings was $10,000 in gold. His spirit still haunts the hallways of the mansion, seeking his misplaced fortune.

Owners through the decades found their health, sanity, and wealth ruined by the touch of this accursed building. One owner ends his days in an asylum; another slips into a coma after a bar fight. The most famous owner of all, Nicholas Cage, purchased the home just after Hurricane Katrina. A few years later, he lost the home in a bankruptcy that would strip him of all his possessions in New Orleans.

Its current owner, a Texas energy trader, is using the mansion as a weekend home to entertain clients and friends. Here’s wishing him the best of luck!

For more history on the mansion and its original owners, click here.