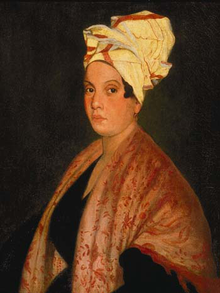 If you’ve read all our other entries and articles about The Big Easy then you are no doubt aware of the horror show the town is capable of devolving into. New Orleans is a phantasmagorical, ethereal, supernatural juggernaut that has a way of simply ramming its otherworldly presence on innocent bystanders and gobsmacked tourists. You fly in for the jazz bands and the gumbo, only to race out with your hair standing on its ends because something crawled out from under your bed and decided it was time for an indecent midnight snuggle. It is a town full of ghosts, tragedies, and stories of sinister ax-wielding serial killers. The question remains, why is this? Why has NOLA become demon Mardi Gras for the damned?

New Orleans was one of the first port cities within reach of the Gulf Stream. Its markets and sailor infested alleys, meters from a heavy traffic shipping route, were a smorgasbord of collectivities and cultures. You had French merchants trading perfumes with sugar barons from the Indies. You had smugglers and pirates, brigands and highwaymen supplying big wig politicians – with fingers in the Capitol coffers – all manner of illegal wears. You had slaves sold for pennies on the pound in the town square. And, moreover, where there was trade, there was PROFIT. New Orleans was a happening town mainly because it was a highly influential town, and it was a highly influential town because it moved money; heaping loads of it.

And from New Orleans, you could easily trade with the northern parts of the US. A ship from Cuba could haul its stock of rum onto a barge and easily slip it up the Mississippi River. New Orleans was a geographical treasure trove.

This influx of so many cultures – European, African, Spanish, Chinese, Turkish, and dozens more – started paving the town with their traditions, myths, and… after a while, NOLA became a hodgepodge of traditions and folklore beliefs.

This is the place that inspired Anne Rice’s “Interview With The Vampire”, the place where jazz was partly born, the place where voodoo made its USA landfall. NOLA is a place so steeped in magic and weird stuff that the locals simply label anything out of the ordinary as Hoodoo, and they don’t even bat an eye. The place where people danced the night away to prevent a madman from killing local girls. A place where a politician – the notoriously corrupt Edwin Edwards – ran against former KKKGrand Wizard David Duke on the slogan: “Vote for the Crook: it’s important.”

“The only way I’m going to lose this race is if I’m found in bed with a dead woman or a live boy.”

With that intro in place, we might as well start the pageantry of strange and often folkloric NOLA denizens that make the Big Easy’s magical tapestry … We have a few to get through.

The first on our list is the world-famous Marie Catherine Laveau (September 10, 1801 – June 15, 1881). Laveau was a Louisiana Creole voodoo practitioner and a polarizing historical figure. Marie has become overtime famous and iconic folklore like character, portrayed in movies, TV series, books, and songs. A character drenched in mystery, charm, and gothic undertones.

Marie Laveau was born a free African American in the French Quarter of New Orleans, Louisiana. She was the biological daughter of Charles Trudeau – a rather influential surveyor and politician – and Marguerite Henry a free woman of color.

When Marie turned 18, she was wed to Jacques Paris, a French immigrant who had fled from the Haitian Revolution. They had two daughters, one out of wedlock. A year after they finally tied the knot, Jacques went and bit the dust; he died in 1820.

For all intents and purposes, Marie was the chimera of the American dream come to life. She was a striking woman, highly charismatic go-getter with a genetic background of 1/3 African, 1/3 Native American, and 1/3 European. Many men were smitten by Marie’s exotic allure.

Following her husband’s decent down the River Styx – not just a really cool band – Marie went and entered a domestic partnership with Christophe Dominick Dummy de Glapion, a French nobleman. They stayed together until his death in 1855 and had – although not entirely confirmed, birth certificates were incredibly unreliable back them – had 15 children.

Marie was a dedicated practitioner of Voodoo and a world revered authority in herbal healing. People all the way from Washington and as far as the Indies constantly called on her for advice.

“Laveau traveled the streets of New Orleans like she owned them.”

What really made Marie stand-out, aside from the fact that folks were deathly afraid of being cursed by her, was her uncanny ability to unearth secrets. If a politician needed blackmail material on their opponent then there was a really good chance Marie had the skeleton in the closet they were after. She could find the smoking gun at the drop of a hat.

Presidents, lawyers, Congressmen, bankers, and wealthy socialites actually had slush funds tagged as LAVEAU EXPENSES. And Marie knew how to market her brand. She started publicizing through the grapevine her magical career. She began spreading rumors, some unsubstantiated, of the power of her pet snake, Zombi; “the reincarnation of the African god.” Her daughter, Marie Laveau II, already a cog in the family business started having grand theatrical public events; huge firework-like displays for the attendees to St. John’s Eve rituals. Marie knew the power of pomp and circumstance.

Whether there was any truth to Marie’s occult powers – a mix of Roman Catholic practices and saints with African spirits and folklore- is up for debate. What is nonetheless known is that Marie was, in fact, a rather ingenious spymaster. Over the years she developed a network of informants; most servants of prominent white households throughout the region.

Marie catered and pumped this well-spring of inside information into a database she could later work for opportunities. Wealthy patrons, the big kahunas of NOLA life, had a bad habit of talking off the cuff – exposing private details – in front of the help.

Marie’s little birds – her spies – were paid in money, favors, or through tonics.

She knew everyone’s secrets mainly because the vaults they were kept had a security glitch; they were blind to the help.

Marie Laveau died on June 15, 1881, at age 79. She died peacefully in her home and had a lavish, heavily attended funeral, everyone, from the lowliest servant to outstanding members of the social elite were present.

The day of her death, the first rumors started making the rounds. People had seen Marie’s ghost prancing around town. Her figure and phantom – indicative of her of legend – slowly becoming a fixture in the NOLA zeitgeist.

Surrounded by lore, legend, and half-truths, Marie is an often disputed historical figure in American history. Was she a saintly patron of the arts and Voodoo practices? Was she a cold-hearted beast, similar to a gang boss? Was she simply a product of an oppressed society?

Up until March 1st, 2015, Marie’s grave was a dark tourism hot spot. Her final resting spot, located in plot 347 of the Glapion family crypt in Saint Louis Cemetery No.1 in New Orleans, was a required pilgrimage site for fans of the otherworldly.

Tourists would visit the grave, draw and X mark with chalk on the tomb, yell out a wish, turn around 3 times and kick on the granite walls. If the wish was granted, they were required to come back, circle their X, and leave Marie an offering. For years, thaw a step common practice… Until the gravesite was vandalized and the Archdiocese of New Orleans had no choice but to restrict access to Marie’s tomb. Now, if you want to visit the bizarre attraction,  you have to book a tour guide and file the necessary paperwork.

Marie, like the Axman of New Orleans and other bizarre tales, is one of the reasons why NOLA – the Big Easy – is by far the spookiest place in the United States. In the streets of New Orleans, you won’t just have to deal with ghosts, but other creepy crawlers far nastier than those ectoplasmic brats.