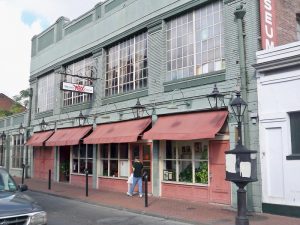 Where else could you see a naked Napoleon taking a bath or take a nap with a cyclops in a cage besides New Orleans? The Musee Conti Wax Museum was full of curiosities. Before it closed its doors for good, it stood as a strange but interesting attraction that was not only entertaining but educational as well. The wax museum was inspired by Madame Tussauds in London. However, the Musee Conti focused on the history of New Orleans. Many of the exhibits showed different aspects of life in New Orleans, albeit with a little bit of flair. The selling of the Louisiana Purchase, the many slave markets around town, and the massacre of Italians in 1821 were all depicted in the Musee Conti. But of course, another New Orleans staple was represented in the museum, but they aren’t made of wax. Several ghosts are believed to inhabit the building, and they aren’t too shy either. Visitors have heard disembodied voices and seen strange shadows moving around the building. Sometimes the wax sculptures seem to come alive, and some visitors even claim that they’ve seen the eyes of the wax dummies follow them across the room. Paranormal experts have done multiple investigations of the wax museum. As it turns out, the place is crawling with ghosts. ESP machines go haywire, and their high-tech ghost scanners often lose power. That signifies particularly strong energies lurking within Musee Conti.

The area around Conti Street was developed during the Spanish Colonial period of New Orleans around the late 1700s. The lot where the Musee Conti stood was previously several separate properties.

The first establishment built on Conti Street was the all-boys Jefferson School. Originally built on Bourbon Street, the school was moved to Conti Street for unknown reasons. Daily life at the Jefferson School was pretty similar to school today. The boys learned a wide array of subjects, from history to math to reading to French. But there was one subject that stood out; fencing. The sport was popular at the time, and as one can expect from a bunch of teenage boys with raging hormones, fencing duels around the streets of New Orleans were a common occurrence.

The school closed down in the 1880s. That’s when Silvestre Blasini, a Corsican immigrant, got ahold of the building. Blasini was a scandalous businessman and womanizer who owned a coffee shop, oyster bar, and now a house where the Musee Conti would later stand. Blasini was an abuser, and he was known to beat his first wife, Isabella. Blasini met Isabella in Mexico and told everyone the two were married. But his neighbors were suspicious. They suspected that Blasini had only kept Isabella around as a trophy, and many believed the two never married. When they were invited over, Isabella was often distraught and in tears. Sometimes they heard her screams from a few houses over.

When Isabella passed away, Blasini remarried just three months later, this time to a woman named Emilie. Blasini and Emilie had one son, Silvestre Blasini Jr. After the marriage, Blasini removed the children from his first marriage from his will. This set off a family feud in 1890 when Blasini died, as both sides of the family wanted control over the house on Conti Street. They took it to court, where a judge ruled in favor of Blasini Jr and also claimed that it was unlikely that Blasini had been abusive toward Isabella, despite evidence to the contrary.

The building later functioned as a coffin factory. It was notoriously dangerous; the children who worked there sometimes lost a finger, and the materials and chemicals used made the building a fire hazard. And in 1920, the building went up in flames. Whether or not there were casualties is unknown. A brewery then took over the building after it was rebuilt. The American Brewery was one of the best in New Orleans and ran steady until the 1960s.

In the 1960s, hotel owner Benjamin Weil and theatre owner Isador Lazarus visited Madame Tussauds in London. They were enamored by the realistic wax sculptures and the way they were used to tell a story. They decided that New Orleans just had to have one. They created the Musee Conti Wax Museum. It would be a wax exhibit that told the story of New Orleans.

But remember, this was New Orleans! It couldn’t be any old wax museum. It had to be weird. It had to be strange. It had to be provocative. But it also had to be informative. The duo spent today’s equivalent of $5 million to have the wax dummies sculpted and shipped from Paris. They even flew them over on Pan Am in passenger seats. After a few years of hard work and preparation, the Musee Conti Wax Museum opened to the public in 1964.

The exhibits told the story of New Orleans in style. The naked sculpture of Napoleon taking a bath represented the sale of the Louisiana Purchase to the US, an act considered by many French to be traitorous. The sponge covering his nads is a nice touch. The story of the red-light district is symbolized by two competing sex workers locked in a brawl. The scene highlights the dangerous streets of Storyville, where “Whiskey, women, and frequently even life, were cheap,” according to the sign on the exhibit.

The Musee Conti also portrays the city’s slave markets, the massacre of Italians in 1891, and the massacre of the French in 1768. The creation of craps in New Orleans, a popular gambling game, is detailed as well.

The Haunted Dungeon is one of the Musee Conti’s more unusual exhibits. However, it’s not based on New Orleans, but on Madame Tussauds Chamber of Horrors. This is where one can relieve their itch for the macabre. The exhibit hints at the wax sculptures actually being live human bodies dipped in wax, as one can see the sculpture of two employees dipping a young woman into a barrel of beeswax.

The caged cyclops is the last exhibit before exiting the wax museum. The hairy monster is rumored to be made with natural human hair and keeps an eye on the back door in case any freeloaders make their way in. The cyclops is said to be an example of the New Orleans tradition of lagniappe, or “a little something extra,” according to the sign near the exhibit.

The wax museum survived the devastation of Hurricane Katrina, to the surprise of the owners. Whereas they thought the wax dummies would melt in the 100-degree heat, they somehow escaped unscathed. The Musee Conti remained open until 2016 when it closed its doors for good.

Who would’ve guessed that a room full of wax dummies in New Orleans would also be haunted? While many people are normally creeped out by wax sculptures (see: uncanny valley), it’s not just the dummies that haunt the Musee Conti. There are bonafide ghosts living in the museum.

Visitors to the wax museum can expect to be greeted by disembodied voices who, despite their frightening presence, really just want to say hi. Some believe the voices to be leftover memories from the days when the boy’s school stood at the site. Other theories point to the coffin factory fire, where the ghosts of those who perished still live on in the building. Though it’s unknown if anyone actually died in the fire, the possibility is highly likely given the frequency of workplace injuries.

Strange shadowy figures are also known to roam around the building. They tend to move between the wax figures, following visitors around the exhibit. While nobody’s been directly approached by the shadows, the phenomenon is a creepy one nonetheless.

Some visitors have even claimed to be haunted by the dummies. Wax sculptures can be a bit creepy, and the claims that some are actually live humans dipped in wax can’t be ruled out. People claim that the wax dummies move on their own, while some say their eyes follow you around the exhibit. Perhaps the wax sculptures are looking for their next victim…

Learn more about the haunted history of New Orleans!

The Musee Conti Wax Museum displayed everything you needed to know about the history of New Orleans. Unfortunately, they closed their doors in 2016. You can still read about some of New Orleans’ most haunted houses, like the LaLaurie Mansion. Daphne LaLaurie brutally punished her slaves, committing some of the worst atrocities that a single person can inflict. She was found out when one of the slaves started a fire, burning down the house and exposing her torture chamber. Sultan’s Palace was the site of a brutal massacre when an unknown assailant killed several partygoers at the mansion during a thunderstorm. Passersby often claim to hear screams coming from the Sultan’s Palace at night. The Old Absinthe House is a classic New Orleans tavern. While today it may resemble a sports bar, this was the site of a meeting between Andrew Jackson and pirate Jean Lafitte. Knowing New Orleans was the pirate’s territory, Jackson enlisted the help of Lafitte’s fleet to fight the encroaching British. Today, the ghosts of Jean LaFitte and Marie Leveau can be seen having an occasional drink in the bar. Want to learn more about the history of New Orleans? Read up on the top ten most haunted spots in the city right here!