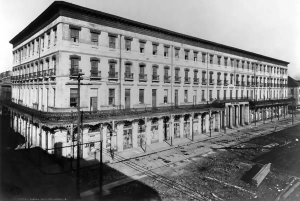 If you are looking for a place to stay and have a little more money to spend on a room, then you may want to check out the Omni Royal Orleans hotel. It is considered to be one of the most prestigious hotels in the Crescent City and usually gets a lot of guests from the world over. Though it is one of the most luxurious hotels, the story of its past might be one of the reasons why it might actually be haunted. Could it be that the spirits of past guests have overstayed their welcome? Or was it something else? You are about to learn the history of this hotel and the stories of how it might be one of the most haunted places in the city known for its jazz and even voodoo culture. At one point, it served as a hub of one of the major trades in the Southern United States prior to the Civil War. 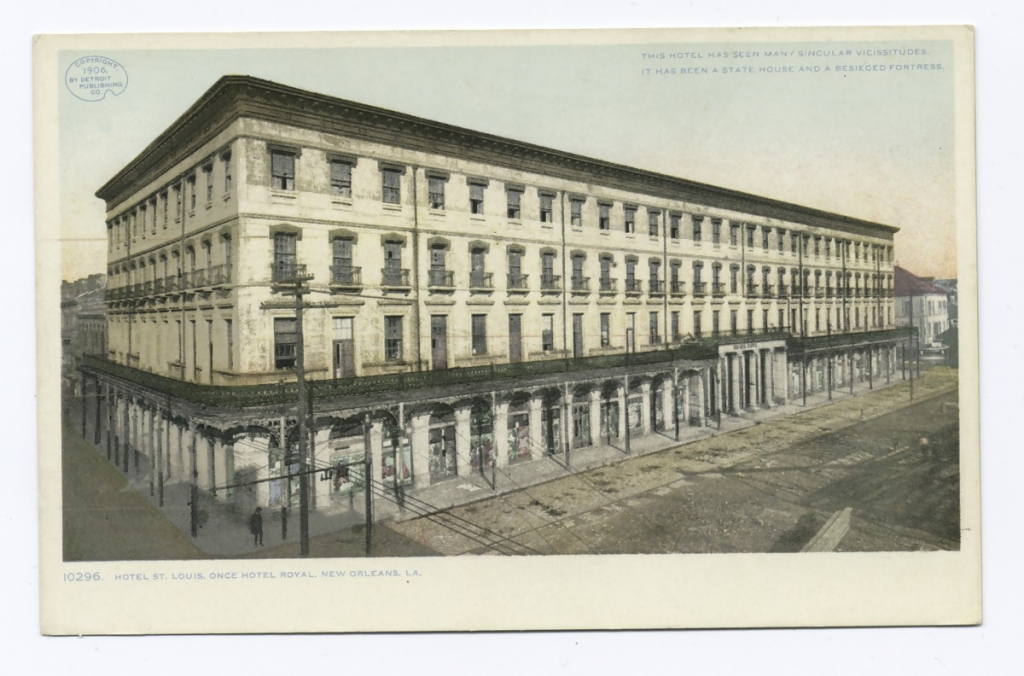 The Omni Royal Orleans was originally known as the St. Louis Hotel. It was built by the Creoles who inhabited New Orleans as a rival to another hotel that was built by Anglo-Americans known as the St. Charles Hotel. The hotel is situated in the French Quarter neighborhood of New Orleans where it stands to this day. The building was constructed in 1838. Early on in the hotel’s years, the Creoles utilized the hotel as a place where its people from all over can visit. Other guests have also included visitors from Europe. The place was perhaps known for the high society to socialize and even display scenes of debauchery. Despite the lively nightlife that would be one of the centerpieces of New Orleans culture, it was also a place where the wealthy citizens of the South would purchase or sell slaves. The hotel was one of the major hubs of the slave trade in the Southern United States before the Civil War had broken out.

Most of the time, there would be auctions occurring with landowners making bids and purchasing for slaves. The slaves were originated from parts of the United States and had been brought in by boat from other port cities like Baltimore. While slaves were waiting to be bought or sold, they were held captive in an undisclosed location somewhere in the French Quarter. In 1840 alone, slave sales were ranging to about $50,000 (or $1.5 million in 2019 valuation) were sold out of the St. Louis Hotel alone.

In 1841, a fire had swept through the hotel and left it completely destroyed. However, it was quickly rebuilt thanks to financial contributions from a local bank. The building was rebuilt with fire-resistant materials. During the Civil War, the hotel served as a medical facility for Union Soldiers after the city itself was seized in 1862. As Reconstruction in Louisiana was underway, the State of Louisiana purchased the building where it would serve as the “de facto” Capital Building. From there, it became one of the occasional meeting places of the Louisiana legislature.

The Most Haunted Hotel? 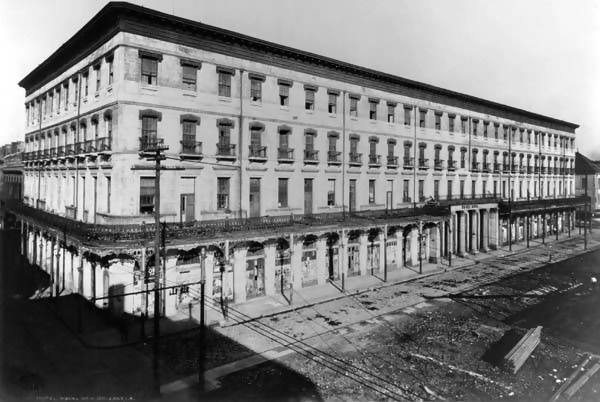 In the city where voodoo and dark magic culture is prominent, it certainly would be no surprise that spirits might be wandering around all over the city. But are they guests that have long overstayed their welcome. One such account from a previous visitor has reported that the spirit of a maid is said to be wandering the halls, making sure that each of the guests is comfortable and ensuring that their stay was a pleasant one. Considering the irony, what spirit could make a person comfortable? One other guest had mentioned that their sheets were said to be tucked in almost perfectly while waking up. They didn’t recall the sheets being tucked in prior to going to sleep. It was almost as if the maid was doing her best to keep the guests warm and have an enjoyable sleep.

Of course, the sounds of moaning and groaning in the halls have also been reported. While it was said that the slaves had been kept captive at the hotel or nearby in the French Quarter, many have said that the phantom noises may be from the spirits of those slaves that had endured harsh conditions and treatment as they were being bought or sold to other slave owners.

Despite the hotel being destroyed and rebuilt in the same spot on two occasions, it’s perhaps fitting to say that in a place where hauntings and spiritual activities have happened almost constantly, the spirits of the French Quarter still seem to be taking up residence at the Omni Royal Orleans hotel (even after waiting years or decades until the place was rebuilt).

Hauntings At The French Quarter 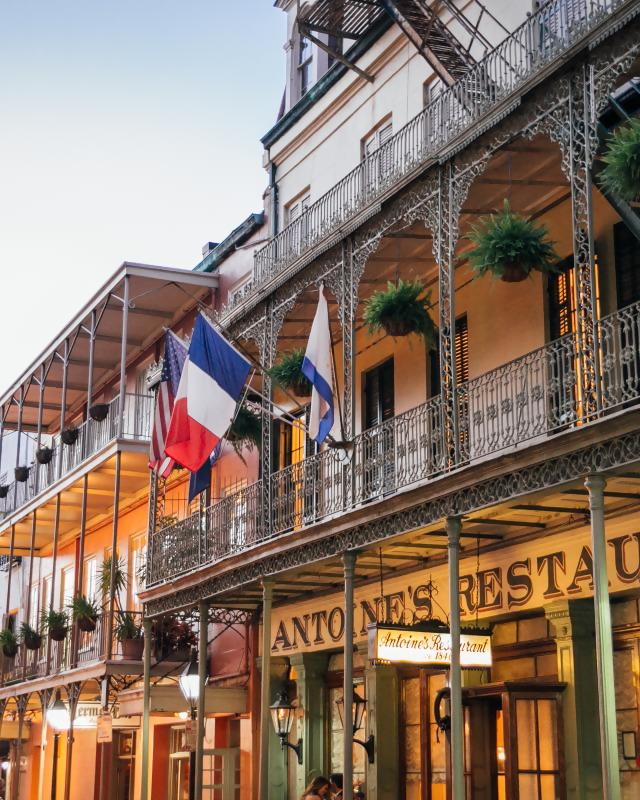 Of course, much of the French Quarter is reported to have seen spirits and its visitors have experienced uneasy feelings while coming and going. But how did the neighborhood itself become haunted to begin with? One such event can be traced back to the late 1800s. From 1817 to 1905, the city had been in the grips of a lengthy yellow fever epidemic. As the yellow fever had ravaged the city, it reached its peak throughout the 1850s when it killed nearly 8,000 people in 1853 and nearly 5,000 people five years later in 1858. It would not see another peak until 1878 when it claimed the lives of 4,000 people. All told, more than 20,000 people had died due to yellow fever.

The virus was carried by mosquitos and had already infected a good part of the immigrant population that had descended into New Orleans. It had gotten to the point where it was easy to contract the virus and eventually die from it. The cases year after year would spike in the summer months due to the mosquitos being out and about. It had gotten to the point where drivers of wagons known as “corpse wagons” were circling the neighborhoods calling anyone in the area to “bring out their dead”. It was said that the victims of the yellow fever were buried in mass graves. By the turn of the 20th century, scientists had a solution that put an end to the suffering. By 1905, the yellow fever epidemic was subdued.

It is unknown where exactly the mass grave is located, but it can probably be traced to somewhere in the French Quarter. Whether buildings were constructed over the graves is anyone’s guess. But the spirits of those who met their untimely deaths are said to still wander the streets of the French Quarter searching for answers as to why they have passed. But for now, they take up refuge in the homes, bars, and hotels that draw in many residents and tourists to the French Quarter day in and day out.

If you plan on visiting the French Quarter for some good old fashioned paranormal fun, then you may want to stay somewhere on the French Quarter. If you can swing the price tag, you can probably stay at the Omni Royal Orleans. Through many years of disaster and rebuilding, the hotel still stands. But the spirits that inhabit the hotel might still remain. And you may encounter one the minute you walk outside the door to your room. If you can’t find one in this hotel, they may be elsewhere in the French Quarter.

Have a look at these other spooky ghost tours around the U.S.