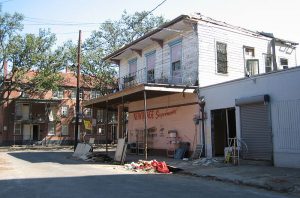 Storyville was the red-light district of New Orleans, Louisiana, from 1897 to 1917. It was erected by municipal ordinance following the New Orleans City Council’s new mandate to control and eventually tax teh world’s oldest profession.

The idea was the brainchild of Sidney Story, a city renowned alderman. The politician drafted guidelines and bills to control prostitution within the city as a way to coax a new revenue stream. The statute ultimately appointed a 38 block area as the part of the city in which prostitution, although still partly illegal, was allowed or controlled.

The area was originally named “The District”, but its nickname, “Storyville”, soon took hold, much to the vexation of Alderman Story. Nowadays, only a few of its portions of Storyville are presently noticeable. The district lies in Faubourg Tremé and the bulk of the land was repurposed for public housing.

The History of Storyville

The whole lacey dressed, skimpy dressed, can-can fandango began when NOLA politicians looked out onto their land and discovered that someone, somewhere, wasn’t paying their taxes. There was money to be had and the professionals of Shakespear’s beast of two backs, sometimes three of a dozen were breaking the bank and skimping out on giving the Big Easy a slice of their intake.

Sidney, came up with the vision while visiting nearby port cities and noticing how the trade’s tax stream was being re-directed and used proactively for infrastructure purposes.

On July 6, 1897, prostitution was given a legal loophole; it wasn’t one hundred percent legal…BUT… So they fidgeted the law and crafted a legislative tunnel that would allow brothels and call-girls wiggle room. The politicos wanted to eat their cake and eat it. The blowback of legalizing the trade would have dampened their political heading and cost them in the ballots; prudes and conservatives detested the practice.

The idea, simple, prostitution in the rest of the city was frowned upon, in Storyville – under the keen eye of the government – it could be regulated and monitored. Prostitution, the politicos floated the idea, was impossible to ban and prevent; too hard to outlaw and watch over. So, they said, we’ll just kick out into the outskirts of town… where no decent Christian will be vexed by its perversion; a lucrative windfall of perversions.

Storyville was based on the German and Dutch models of legalized Red Light Districts. Between 1895 and 1915, “blue books” were printed and heavily distributed in the Big Easy. These volumes were guides to wantonness, hustling, and sin for visitors that wished to partake of the districts many MANY vices. Blue Books included brothel descriptions, including prices, particular services, and the “stock” each bordello offered.

The motto inscribed inside these sell-out volumes?

“Order of the Garter: Honi Soit Qui Mal Y Pense”… That’s Latin, swanky, for Shame on Him Who Thinks Evil of It.

Blue Books unto themselves were a huge revenue stream. Aside from teh 4-1-1 on teh brothels and prostitutes, they also carried notices for national and local cigar makers, distillers, attorneys, restaurants, drugstores, and taxi companies. Blue Books could be obtained everywhere in the district

It took some time for Storyville to achieve recognition, but by 1900, it was on it was fast becoming New Orleans’s largest revenue center.

Businesses in Storyville varied from tawdry “cribs” to more upscale dwellings; a row of elegant mansions along Basin Street for a well dressed sugar daddy. New Orleans’ cribs were 50-cent joints, the more expensive businesses could cost up to $10. Racially mixed brothels coexisted in Storyville, but black men were barred from legally buying services in either of them.

Like weeds, all around the brothels bars, saloons, restaurants, and even movie theaters started popping up; in a way, Storyville was more NOLA than the rest of the Big Easy. That picture you have of New Orleans in your mind… That’s Storyville. For example, Jazz did not start in Storyville, but it thrived there. Many out-of-town guests first heard this new style of music there before the tunes spread north. Composers who got their big break in Storyville include Buddy Bolden, Jelly Roll Morton, and Pops Foster.

At the outset of the United States’ embroilment in World War I, Secretary of War Newton Baker did not want soldiers to be distracted before being tossed into the fray… Washington leaned hard on the NOLA government and managed to shut down Storyville. By 1917, prostitution once more began illegally in New Orlean.

Most of its structures were later demolished, and in 1940 teh area became the Iberville housing project.

As a whole Storyville or the area that was once known as Storyville is filled with ghosts, goblins, and spectral tunes. It was a happening section of New Orleans and one that doesn’t stop its ramblings and rave on account of something like death. Nope, those fat cats are still at it, enraging Pop music enthusiasts and Death Metal fans with unending piano and sax medleys.

The area is full of tales. Phantom apparations, live music in the middle of the night, girls in lacey garments beckoning strangers then turning into mist the second the gentleman reaches for his wallet. If you add that spicy ingredient and then slap a pinch of dereliction, high felony rate, and teh fact that after Storyville close shop the area became a bombed-out pit that even the cops were afraid to enter, then, by God, you have a tasty horror story in the making.

Nonetheless, I like to focus on singular haunts… Why? Cause’ those are the juicy ones. I could drone on and on about all those specters, interpreting Trip-Advisor reviews and drenching up Yelp yokels for this piece… but I won’t. I will, nevertheless, talk about a walking statue and teh most famous ghost of the area… Josie Arlington.

Arlington was born Mary Deubler in New Orleans to a German couple Josie was a fiery German, teh sort of woman that drove men insane, tested their stamina, frayed their wits, and then did a 180º and inflamed their passions. You know that saying: “can’t live with ’em can’t live without them,” Josie might as well have had that motto tattoed unto her forehead as a warning. She was shrewd, short-tempered, violent, fiery, and sexy.

Arlington started operating as a prostitute in 1881, to support her family. In less than a year, that was the sort of money she was racking up, Josie opened a brothel at 172 Customhouse Street before the murder of her brother Peter Deubler in November 1890.

By 1891, Josie had been will all types of men and women in power, had been involved in a murder scandal – her brother’s mistress husband had gone target practicing with her brother’s gun and used her brother’s face as a bullseye – and was now a renowned businesswoman.

Four years after her brother’s death, Josie had reinvented herself; she had castoff her former reputation. She had taken a new lover, John Thomas “Tom” Brady who was a clerk in the City Treasurers office. Josie began to hire foreign girls for her bordello and started to spruce up the joint; she began to brand the enterprise as chic and upscale. She also, now making more money than most bankers, started buying real-estate around her property… a restaurant there, a flophouse over there, a bar… etc. Why? Because Josie had spies in the seat of government and had caught wind of Alderman Story’s plan to create THE DISTRICT. Bought soon to be high-value properties at dirt cheap prices.

In 1898, after Storyville was established, Josie opened the Chateau Lobrano d’Arlington right near the main entrance of the red-light district. The place offered about ten or twelve girls at any time, as well as a live sex ‘circus’ that could be observed for an extra fee. It had a reputation as one of teh most depraved business in the area… Josie always thought it was an exaggeration and constantly told reporters that “no virgin was ever defiled or exploited by her business.”

Arlington died in 1914 and was buried at Metairie Cemetery, in a tomb designed by Albert Weiblen.

The day after the first anniversary of her death, Arlington was disinterred and taken from her mausoleum. The reason? Her heirs had squandered her money and couldn’t pay the graveyards upkeep fees. Arlington’s remains were removed to another cheaper part of the cemetery. The spot of her body remains a guarded secret to this day.

The big BIG boogeyman that stalks Storyville and Metairie Cemetery is… drumroll please… the freaky looking Statue perched at Josie’s ex-resting place. The bronze female shape is believed to signify a virginal girl being turned away from Josie’s brothel door; a final statement to Josie’s promise that no woman’s chastity was ever soiled on the grounds of her establishment.

The imposing effigy is said to move around and leave its post at the door of the monument… the bronze behemoth prancing around the cemetery and even the back alleys and shadows of Storyville. Dozens have seen the creature, some claiming its a guardian angel — always on the lookout for some rascal or knave with ill intents on their mind.

For more macabre tales, check out our blog.