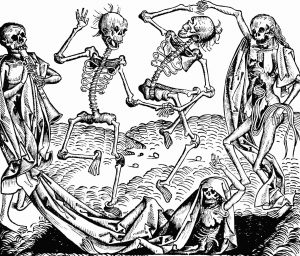 Yellow Fever is a horrifying disease, but it was a fact of life during the 1800s. Just about every major city in the South became a breeding ground when summertime came around. Charleston, Savannah, Shreveport, and especially New Orleans. But that didn’t exempt northern cities like New York and Philadelphia from having their own outbreaks either. Yellow Fever was spread via mosquito transmission, but this was before the discovery of bacteria, so nobody had a clue as to what caused the disease. The dominant paradigm was miasma theory, where “bad air” was said to cause illness. This resulted in things like graveyards being moved to the outskirts of the city, mass burnings of medicinal herbs to combat the “bad air,” and even firing cannonballs into the sky to “fight” the miasma. The Big Easy had nonstop annual outbreaks from 1825 to 1900, with the worst taking place in 1833 and 1853. The last outbreak in the US occurred in 1905 in New Orleans, and valuable insight was acquired that pointed to mosquitos being the culprit. This helped squash the disease in the US once and for all. In a span of a century, over 40,000 people in New Orleans died of Yellow Fever.

The Yellow Fever epidemic hit New Orleans every few summers like clockwork. Even though it was predictable, there was nothing that could prepare you for the experience of actually contracting the disease. The symptoms were horrifying, beginning with fevers, chills, and loss of appetite. It then escalated as severe muscle cramps and stomach pains kick in. The next stage was liver and kidney failure. The loss of liver function leads to jaundice, or a yellowing of the skin and eyes, which gave the disease its name.

The final phases of the disease are characterized by extreme pain accompanied by the hemorrhaging of blood from every bodily orifice, like the eyes, ears, and even fingernails. This is when things got ugly, with writhing, moaning, and screaming defining the last few moments of the victim’s life as they bled from every part of their body. Vomiting coagulated blood wasn’t uncommon either. Keep in mind that all of this took place in a matter of a few days.

Effects on the Social Structure

The extreme symptoms and widespread proliferation of the disease meant that it rocked the existing hierarchy of New Orleans. The elites made sure that the social effects of the disease worked in their favor. Around 8% of the city’s population died every summer, and about half of the people who contracted the disease survived. Those who were lucky enough to make it through gained lifetime immunity, which was a valuable thing to have.

Yellow Fever was nicknamed “The Stranger’s Disease.” Those who lived in the city all their lives were likely to be immune. The many immigrants to the city usually had yet to be exposed. Needless to say, they had higher death rates. Most places wouldn’t hire if you weren’t immune; there was no use training someone who would likely be dead by August. This created a stratified class structure. You were either immune and vulnerable. In or out. As there was no way for one to prove their immunity, many simply lied, or tried to prove they were immune by purposely exposing themselves to those who were sick.

Wealthy socialites used the disease to justify slavery. They claimed Black people were naturally immune to the disease, an argument based on scientific racism that has been applied to several other diseases, most notably malaria. They argued that because Blacks were immune, it was humane to use them to do manual labor, as that kept whites out of spaces where they may potentially contract the disease. Of course, they knew it was false. Behind closed doors, slaveowners would refuse to buy slaves if they weren’t immune.

In all, Yellow Fever had long-lasting effects on the people and culture of New Orleans. No part of the city remained untouched by the infamous “Yellow Jack.”

Marie Leveau was a Voodoo priestess and spiritual healer. She was also quite the humanitarian, volunteering as a nurse to aid the sick. She primarily focused on helping slaves, and freedmen overcome the disease. Before becoming a priestess, she worked as a hairdresser. It was actually her work during the Yellow Fever epidemic that drove her to become more involved in spirituality.

Marie Leveau died at the ripe old age of 70. She was buried at the Saint Louis Cemetery, though many have seen her ghost all over New Orleans. She’s often spotted having a drink at the Old Absinthe House.

Our Lady of Guadalupe

Our Lady of Guadalupe was built in 1827 specifically as a chapel for the victims of Yellow Fever, as the city wanted to keep the bodies away from the city center. The lines at the chapel were often a mile long. Bodies piled up in front of the church, left to rot in the sun. The corpses often burst open, exposing the victims’ entrails and leaving a horrible stench that blanketed the entire neighborhood.

Our Lady of Guadalupe was conveniently located next to the Saint Louis Cemetery to make it easy to transport the bodies after the funeral services. The cemetery had a steady supply of bodies during the years of the epidemic. While many of the victims buried in Saint Louis were wealthy socialites, the bodies of everyday citizens were buried there just the same.

First opening in 1736, Charity Hospital saw some of the ugliest waves of the epidemic. Patients were often brought to Charity Hospital in hopes of recovering from the disease. In 1858, a record 2,700 were admitted with Yellow Fever, with 1,400 dying within the hospital walls.

The hospital was left abandoned after being destroyed by Hurricane Katrina in 2005. Locals claim ghost sightings in and around the hospital are common occurrences.

Henriette Delille founded the Sisters of the Holy Family in 1842, the country’s first and oldest congregation of Black Catholic nuns. In 1881, they moved into the old Orleans Ballroom, renaming it Saint Mary’s Academy, which served as a school and orphanage for young Black girls. Saint Mary’s was hit quite hard by Yellow Fever. Several children and nuns lost their lives throughout the epidemic.

The Sisters of the Holy Family has since moved to another location, and the building is now the Bourbon Orleans hotel. The ghosts of the children who died of Yellow Fever are said to haunt the halls of this luxury hotel. One commonly seen ghost is that of a young girl playing with a ball on the sixth floor.

The Chartres House Cafe was once known as the Gally House, built by Major Louis Gally in the late 1700s. The rear of the building housed the servant’s quarters, which were used to quarantine slaves infected by the disease during the worst years of the epidemic. Today, tourists and passersby who walk by the iron-barred windows of the servant’s quarters claim to see the ghosts of the victims peering from inside. Some say that you can feel a child’s hands tugging on your clothes or arms if you get too close.

In Catholicism, Saint Roch is the patron saint of good health. He provided aid and ministered to those who contracted the plague in 14th century Italy. He was banished after contracting the disease, and legends say that a dog would visit him in the forest and bring him bread. The dog licked his wounds clean and nursed him back to health. Roch was later discovered and elevated to sainthood.

Fast forward to New Orleans in the mid 19th century. Reverend Peter Thevis was grateful that those near him hadn’t died of Yellow Fever. Believing Saint Roch to be the one protecting him, he opened a shrine to honor his patron saint. Those who showed up to pray to Saint Roch often left behind prosthetic arms and legs, glass eyes, and polio braces, which still line the walls of the chapel today. Several ghosts and strange phenomena have been reported at Saint Roch’s Chapel.

The Pharmacy Museum was once where the people of New Orleans went to find unorthodox cures for all sorts of ailments. Malaria, smallpox, syphilis, and, yeah, you guessed it, Yellow Fever. The cures revolved around untested, and often dangerous, remedies, along with a touch of Voodoo. When all else failed, people scrambled to the pharmacy to find some sort of cure that would hopefully rid them of Yellow Fever.

Today, the Pharmacy Museum looks just as it did during the 1800s, complete with bottles of unusual medications, huge syringes, and even a jar of leeches. They say the ghost of Dr. Dupas still resides in the building. He was known for his horrifying human experiments, which often included slaves and pregnant women.

The city of New Orleans is no stranger to tragedy. In the late 1700s, two massive fires raged through the Big Easy, nearly leveling the city and reshaping the future of the French Quarter. The flames also left a ton of ghosts in its wake. Click here to read about the Great Fires of New Orleans!