The Court of Two Sisters 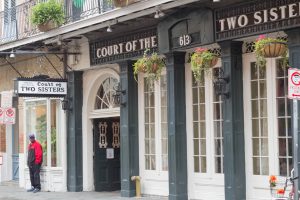 While the Court of Two Sisters sounds more like a horror movie, it’s actually one of the best fine dining restaurants in New Orleans. While most guests show up for the barbecue shrimp and bread pudding, paranormal enthusiasts will tell you that the building is a hotbed of otherworldly phenomena. The Court of Two Sisters is named after two Creole women who ran a notions shop in the building. Even though their ghosts still haunt the restaurant to this day, they aren’t the only spirits in the building. In the 1940s, A New Orleans socialite named Amelie Cooper was murdered by her husband in her apartment just above the Court of Two Sisters. Not long after, her husband was also found strangled to death in his apartment, also above the restaurant. In the middle of the restaurant’s courtyard is a mysterious fountain, known as the Devil’s Wishing Well. Legend has it that Marie Leveau used the well to perform Voodoo rituals. Another legend states that pirate Jean Lafitte killed three men in a duel underneath the willow tree in the courtyard. Needless to say, the restaurant has quite a legacy. The two sisters, Emma and Bertha, have been known to appear in the courtyard late at night. Others have reported unusual sightings, like fairies, floating orbs of light, and strange figures dancing around the courtyard. Some say that certain ghosts like to appear behind the fire of a flambee.

Governor’s Row and the Two Sisters

Back in the 18th Century, the 600 block of Royal Street was known as Governor’s Row. The area was home to several monarchs, politicians, and heads of state. Five governors and two Supreme Court Justices lived on Governor’s Row. Zachary Taylor, the twelfth president of the United States, also lived on Royal Street at one time before getting elected.

Emma and Bertha Camors were two Creole sisters who saw an opportunity to make a living on Governor’s Row. They opened up a notions shop on 613 Royal Street, selling ornate jewelry, clothing, Mardi Gras costumes, and perfumes, some of which they imported from Paris. The Camors came from an aristocratic family, so they knew how to cater to the expensive tastes of the women on Royal Street. They called their boutique “The Shop of the Two Sisters.”

Emma and Bertha were tight-knit. Nothing tore them apart. When Emma’s husband passed away in 1904, they closed the shop together. At the time, Italian immigrants began to outnumber the Creoles, so their customer base was disappearing. After closing the shop, they remained side-by-side through marriage, debt, and even in death. In 1944, the Camors sisters passed away within two months of each other. They were buried at the St. Louis #3 Cemetery.

In the few decades after the Camors sisters sold their establishment, the building went through several hands. The property value plummeted, but the building still hosted bistros, restaurants, and a speakeasy. It wasn’t until James Cooper bought the building just before World War 2 that the property once again became profitable. He leveraged the New Orleans shipbuilding industry to bring in customers. Unfortunately, James Cooper was also a violently abusive husband.

James was married to a singer and  actress by the name of Amelie Cooper, also known as “Diddie.” They had been living in an apartment above the courtyard. The two hadn’t been married a year when they got into a heated argument that caused them to separate. Diddie ended up moving into her own flat, which was still in the same building. One night, James came to Diddie’s apartment. He appeared to sincerely want to make amends and invited Diddie out to a football game. She agreed.

The next morning, Diddie was found brutally murdered in her apartment. Her head had been smashed open with a blunt object, and the marks around her neck indicated that Diddie had also been strangled. Obviously, the culprit was James Cooper, but being as influential as he was, the law avoided taking James in.

That was until a mysterious woman supplied a ton of evidence to the Grand Jury, all of which pointed to James being the killer. He was arrested, charged, and taken to trial six months after the murder. Even with an overwhelming amount of evidence, James was acquitted by the all-male jury. He threw a party at the Court of Two Sisters to celebrate.

In a strange twist of fate, James Cooper was found dead in 1956. He had been strangled to death in his apartment above the courtyard, just as Diddie had been found a few years earlier. The coroner said James had an allergy that caused his throat to swell up. Others say there were paranormal forces at play. Perhaps it was Diddie’s ghost who had come back for revenge?

Legends of the Courtyard

The Court of Two Sisters has had two of the most iconic characters in New Orleans pass through its gates. They say that Marie Leveau lived near Governor’s Row, which would make sense, considering she held the dirtiest secrets of Louisiana’s high society. Legend has it that she would practice Voodoo rituals at the well in the center of the courtyard, now called the Devil’s Wishing Well.

Pirate Jean Lafitte made an appearance at the Court of Two Sisters as well. Legends say that he killed three men in a duel underneath the willow tree in the courtyard. The tree stood for over two centuries, finally succumbing to Hurricane Betsy in 1965.

Another legend states that the front gates at 613 Royal Street were adorned with magic by Queen Isabella the II of Spain. This could explain the magic fairies that are said to float around the courtyard.

The Ghosts of the Court of Two Sisters

With so much fascinating history, it’s no wonder that there’s a ton of ghost stories at this fine dining establishment. The Court of Two Sisters has seen several ghosts, spirits, and supernatural phenomena, going all the way back to the 18th century. The haunted legacy continues to this very day.

The Camors sisters are said to still haunt the building. Inseparable in life, they have remained so in death. The elderly apparitions of the Camors are said to make late-night appearances in the courtyard, where they sit side by side in silence on the courtyard benches. Those who have seen them say they leave behind happy and joyful emotions.

The staff and guests often report ghosts floating around the kitchen and dining rooms. They like to watch some of the cooks prepare their meals, giving the staff a major case of the creeps. Guests claim that certain apparitions have appeared when the cooks flambee a dessert at the table, and they always appear behind the flame, eerily staring at the guests. Some staff report that items in the kitchen fall down or get knocked over at random, with no visible outside stimulus.

New Orleans is a haunted city. That’s no secret. But a few people in the city’s history sure did lead secret lives. Jean Lafitte was a master pirate and smuggler, who along with his brother Pierre, kept the city’s economy afloat during the Embargo Act of 1807. He pirated Spanish merchants and resold their wares in his famous Blacksmith Shop, which is still standing today. Much about Jean has been kept in the dark, including his place of birth. He’s the most famous pirate in American history, but nobody knows whether he was born in France, Haiti, or New Orleans! Marie Leveau was a Voodoo priestess who also spent her time aiding the Black slaves and freedmen of New Orleans. She often hung out at Congo Square, where she performed rituals for tourists and onlookers. She also dished out the dirt on some of the most powerful people in the city, using them as leverage for favors and pardons. Her body was laid to rest at Saint Louis Cemetery #1, where you can catch a glimpse of her ghost. The spirits of both Marie Leveau and Jean Lafitte can be seen hanging out at the Old Absinthe House having a drink.