The Delicious Ghosts at Arnaud’s 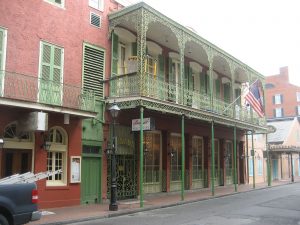 In 1918, a French wine salesman named Arnaud Cazenave decided to jump into the thriving New Orleans restaurant industry. The result was Arnaud’s, which today is one of four restaurants in the world serving authentic Creole cuisine, known collectively as the Grand Dames. Not only does Arnaud’s have the largest kitchen in the city, it’s the biggest restaurant in New Orleans. Period. In addition to the large seating capacity, the restaurant also has 14 private dining rooms, a massive bar, and a Mardi Gras Museum. But Arnaud’s has a dirty secret. Behind the best Oysters Bienville in town are some of the tastiest ghosts New Orleans has to offer. Count Arnaud, as he likes to be called, has been spotted wearing his favorite tuxedo while patiently observing the restaurant’s operations. Despite the fact that he died in 1948, Count Arnaud still runs the restaurant from the afterlife. If he doesn’t like something, he makes sure that it gets fixed. He’s been known to rearrange silverware and furniture to suit his liking. The Count’s daughter, Germaine, also haunts the restaurant. She keeps an eye on the Mardi Gras Museum, as it houses some of her favorite dresses. Guests and staff of Arnaud’s claim to occasionally see Germaine’s ghost as a misty apparition floating around the museum. She’s also been spotted coming out of the lady’s room. Hey, ghosts have to use the bathroom too!

The Early Days of Arnaud’s

Arnaud Cazenave was a wine salesman from France trying to make it in the Big Easy. He decided to get into the restaurant industry after seeing some of the bigwigs around town dropping serious cash at high-end restaurants. In 1918, he launched Arnaud’s, his namesake Creole restaurant catering to the city’s socialites. Despite being geared to the locals, Count Arnaud attracted an international following.

Arnaud’s was profitable. Very profitable. So much so that they invested their money towards the restaurant’s expansion. Count Arnaud began buying up adjacent properties to grow his business. He bought 13 other buildings on the block, many of them being used as brothels, opium dens, or outright abandoned. He was gentrifying the neighborhood. He used the extra space to expand his kitchen, which today is still the largest kitchen in New Orleans. He also built a grand ballroom, several private dining rooms, and private corridors for his VIP guests.

Unfortunately for the Count, Prohibition would pump the brakes on his business. Being a former wine salesman, Count Arnaud wasn’t going to let legality get in the way of his cultural traditions. He circumvented the laws by offering his customers “coffee that they couldn’t get anywhere else.” He used his private dining rooms and hidden backroom bars rooms as safe spaces where his customers could drink freely. Eventually, the long nose of the law sniffed out Arnaud’s hidden speakeasies. The Count was arrested, and his restaurant shut down and padlocked. He fought the allegations in court and won, just in time for the end of Prohibition.

Arnaud’s really took off during the Thundering Thirties. It became the leading restaurant in New Orleans, leaving the competition far behind in its wake. The city’s business class made it their go-to spot for work lunches and Friday night dinners. It was a must for out-of-towners, who came to Arnaud’s for a taste of the real New Orleans. Arnaud had over 50 items on the menu, including nine different preparations of oyster and 16 different styles of potato dishes. Count Arnaud wanted the menu to appeal to foodies and casual diners alike.

After the devastation of World War II, Arnaud’s began to attract a different type of customer. As Europe was in shambles, the well-off decided to leave their war-torn countries and travel the globe. The unique culture of New Orleans and the French Quarter attracted many expats looking to lighten up after the darkness of the war. The city became an international tourist destination, and Arnaud’s was on the list of must-see establishments.

Unfortunately, Count Arnaud’s health was in decline. He passed away in 1948, just a few months before his 72nd birthday. His daughter, Germaine Arnuad, was given the keys to the kingdom. Despite her boisterous personality, she ran Arnuad’s like a well-oiled machine. She was known for her heavy-handed tactics, which were a result of her desire to uphold her father’s reputation. Even though she didn’t have the business-oriented personality one needed to run a restaurant, she knew theatre. Germaine used her experiences onstage to give her the motivation to keep the ship afloat.

In 1978, Germaine sold the restaurant to the Casbarian family. Why? The question is difficult to answer. It wasn’t a logical decision, but the outcome couldn’t have been better. While Germaine constantly got offers from several businesspeople who wanted to purchase the restaurant, she settled on Archie Casbarian.

Firstly, while she didn’t want to sell the restaurant, she was forced to sell to remain financially solvent. Secondly, Archie reminded Germaine of her father. They had the same initials, smoked the same cigars, had similar facial features, and spoke French fluently.

Archie knew how to run a business, he had been running hotels in Cairo, New York, and New Orleans for decades. By the time he bought Arnaud’s, it was beginning to fall apart. He restored the restaurant to its original grandeur. He revitalized the original furnishings, from the chandeliers to the tables and chairs, all the way down to the original ceiling fans.

Arnaud’s is now in the fourth generation of Casbarian management. The restaurant survived Hurricane Katrina, and was one of the first restaurants to reopen after the storm, even offering a full menu upon reopening.

Today, Arnaud’s is one of the four Grand Dames, along with Broussard’s, Antoine’s, and Galatoire’s. These French Quarter restaurants all serve authentic Creole cuisine. Many say there are no other restaurants in the world that can match the cuisine found in the Grand Dames. Whether or not the others are haunted, well that’s an entirely different matter.

The Ghosts of Arnaud’s

In the spirit of New Orleans, you can’t have a meal at Arnuad’s without some spooky visitors. Even though Count Arnaud passed away in 1948, he’s spent nearly half a century watching over the restaurant’s operations. Apparently, he doesn’t want any mistakes that might tarnish his name. Even though the Casbarians are now the rightful owners of Arnaud’s, everyone knows that behind the scenes, the Count is the one running the show.

Count Arnaud can be seen in the corners of the restaurant, out of the way, but still keeping a watchful eye. He prefers to stand at the far left corner of the main dining room when things are really busy. He appears as a tall man with a mustache and a tuxedo, and seems like a normal staff member or guest at first glance. He’s always smiling, seemingly satisfied with the smooth operations of his namesake establishment.

Don’t let his smiles fool you, though. Count Arnaud is quite strict. Even from the afterlife, he feels the need to micromanage the restaurant’s affairs. If something isn’t right, you better be sure that he’ll fix it. The Count has been known to rearrange tables, chairs, silverware, and furniture if it isn’t up to his standards. Some staff members even blame the ghost of the Count for broken dishes and restaurant mishaps.

The ghost of Germaine, the Count’s daughter, is also seen hanging around Arnaud’s. In line with her lively personality, she tends to be the spirit who is more likely to startle the guests. One staff member saw a strange woman leaving the lady’s room, only to see her walk through a wall as if it wasn’t there. Unsurprisingly, the waiter was shaken and took the night off.

Germaine is more commonly seen floating around the Mardi Gras Museum. She was known to lead her own parade during Mardi Gras if only to show off her new dresses. Those same outfits are kept in the museum, and rumor has it that she keeps an eye on them to ward off any potential thieves.

The Richelieu Bar was one of the many buildings bought by the Count to expand his restaurant. It turns out that the Richelieu in particular was an opium den when Arnaud purchased it. Many staff members claim that temperatures in the bar are known to drop dramatically at random. They attribute the phenomenon to the spirits of opium addicts who are angry at the loss of their favorite drug house.

While New Orleans is known for its history, it’s also a foodie’s paradise. Creole, Cajun, and Soul food can all be found throughout the city. But a few restaurants are known to serve up some ghosts along with that shrimp Poe Boy. Muriel Jackson’s Lounge is home to several spirits, including the spirit of Pierre Jourdan. He committed suicide on the second floor, and his ghost appears to many as a collection of floating sparkles. Brennan’s is one of the best restaurants in New Orleans, and one of the most haunted. While some of the ghosts are friendly, a murder-suicide that took place in the restaurant’s Red Room brings out some meaner spirits. Want to see more haunted New Orleans? Check out the top ten most haunted spots in the city right here!