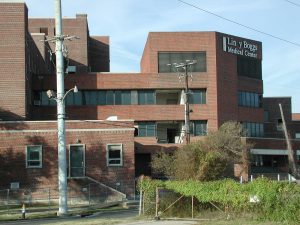 In 2005, Hurricane Katrina wreaked havoc on New Orleans. When the levees broke, the city flooded, destroying homes, businesses, and lives. Over 1,400 people were killed in the aftermath. A big part of the reason so many died was due to the destruction of vital infrastructure. Lindy Boggs Medical Center was among the many buildings destroyed in the storm. The hospital lost power right when it was at capacity, meaning doctors couldn’t perform life-saving procedures, killing dozens of patients. The hospital was abandoned after the hurricane, having taken heavy damage. The now-vacant hospital is home to several urban legends and attracts urban explorers, vandals, and thrillseekers. It also attracts all manners of unsavory characters. On one occasion, a squatter started a fire that almost burned the building down. Over the years, many say the building has become haunted. There have been reports of bloodcurdling screams, strange apparitions, and floating orbs of light. Some visitors claimed to see the ghosts of patients dying on their beds. Others have seen the residual memories of doctors and nurses scrambling to save their patients. One man even claims to have been chased out of the hospital by a demon.

Lindy Boggs Medical Center was an acute care center and had 187 beds. The hospital was relatively state-of-the-art and hosted high-level operations like organ transplants.

In 2005, Hurricane Katrina slammed into the Gulf Coast. At the time, Lindy Boggs was nearly at capacity. Families of the patients and employees also decided to take shelter in the building, believing it to be safer there than in their own homes. During the hurricane, the hospital took superficial damage, and operations remained relatively unaffected. It wasn’t until the levee broke that things took a turn for the worst.

The flooding overwhelmed the hospital’s generators, and the building lost power. Things went haywire. The water pressure dropped, and communication with the outside world was severed.  Doctors couldn’t perform vital surgeries. The machinery that kept fragile patients alive began to fail. Nurses were forced to hand operate ventilators, taking turns in thirty-minute shifts.  Nineteen people died after the first night with no power.

Doctors and patients in Lindy Boggs Medical Center were getting desperate. Food stocks were low. Waste and garbage were piling up. There was no more blood for transfusions. Medicines were running out, and the only thing doctors had in stock was morphine. What’s worse? More people were flocking to the hospital for safety. Nearby residents who were flooded out of their homes began swimming toward the hospital. Soon, over 500 people were crowding the hospital lobby.

The chaotic scenes inside Lindy Boggs mirror what was happening on the outside, but the lack of communication meant that nobody in the hospital knew the full extent of the devastation across the city. They had no idea if help would ever arrive. Lindy Boggs Medical Center had become an island, both figuratively and literally.

Temperatures started to rise in the hospital. The combination of the large crowds, lack of AC, and the southern humidity pushed temperatures well past 100 degrees. The heat put those in the hospice and intensive care unit at exceptionally high risk. The death toll was rising quickly.

Over 1,500 people were stranded in the hospital, 300 of which were patients. Doctors began formulating a plan to evacuate the hospital. There was a parking garage across the street where several boats were stored. A few heroic hospital staff waded across the five foot deep floodwaters and hotwired the boats to ferry them back to Lindy Boggs.

Two grueling days after the hurricane, the DIY rescue efforts finally began to take shape. Doctors had to make some difficult choices. Who was to be saved first? The critically ill? The elderly? Or the most likely to survive? They decided that children and families were to be evacuated first.

Just as the staff-led evacuation was beginning, rescuers were starting to be dispatched to evacuate hospitals around New Orleans. Firefighters arrived at Lindy Boggs via boat. They designated the hospital an MCI, a Mass Casualty Incident. They had to decide which patients were to be evacuated first. Some patients didn’t survive being removed from the building. In all, 45 people died at Lindy Boggs Medical Center.

Lindy Boggs was abandoned after the evacuation. The hospital had taken too much damage to resume normal operations. Like most abandoned buildings, vagrants, squatters, and houseless people used the building for shelter. Graffiti artists, photographers, and urban explorers also visited the vacant hospital to practice their craft. Over the next few years, the building had become plastered with graffiti, and a fire started by a squatter almost burned the place down.

Residents demanded action. In 2013, A Catholic non-profit renovated part of the building to open a small nursing facility. The city’s response was a bit slower. They finally began the cleanup effort in 2017. The EPA funded the effort to remove asbestos and extract the hazardous waste storage tanks. They also pumped out the stagnant water in the basement, which had been sitting there since the hurricane. Despite the cleanup, there aren’t any definitive plans to renovate the building.

The tragedy which took place in Lindy Boggs left an eerie aura hanging over the abandoned medical facility. The vagrants and vandals that moved in definitely didn’t help. Locals often took self-guided tours for a thrill. The dark hallways, dilapidated walls, and leftover medical equipment meant there were plenty of hiding spots for lurkers. It didn’t take long for the urban legends to start swirling.

Those who enter Lindy Boggs might encounter some strange occurrences. The residual memories of the tragedy are still very much alive. Visitors claimed to see patients dying in their beds, begging for help. Some have heard coughing and wheezing coming from empty rooms, and others have heard the sounds of heart monitors beeping. The apparitions of doctors and nurses scrambling across the halls have also been seen. Some have heard the crying and sobbing of family members who have just lost their loved ones.

Others who have taken a stroll through the old hospital have had more sinister encounters. Bloodcurdling screams and disembodied voices have also been reported. Floating orbs of light have been seen as well. Some people have had invisible hands placed on their shoulders. Others say phantom footsteps have followed them. An urban explorer claimed to have been chased out of the hospital by a dark force, which he described as having a demonic presence.

Want to learn more about the haunted history of New Orleans?

New Orleans has a long bloody history. From piracy to slavery to warfare, the people of the Big Easy have seen it all. Even after the devastation of Hurricane Katrina, the city stood strong. Over 1,400 lives were lost, and hundreds of thousands more left the city behind in the ensuing months, but New Orleans bounced back. Yet, the scars remain. Lindy Boggs Medical Center wasn’t an isolated case; Charity Hospital also remains abandoned. Everything in Charity Hospital remains exactly as it was when the storm hit, down to the vials of medicine, making for an eerie scene. Ghosts have been reported in the building, with some claiming to see a strange light emanating from a few of the rooms. Six Flags New Orleans was flooded out after Katrina. The theme park was abandoned and fell into disrepair in the aftermath. It became a haven for thrillseekers and graffiti artists. Many report an eerie aura over the old theme park, and some have random feelings of dread upon entering the premises. While much of the city was abandoned after the storm, dozens of buildings and businesses began to report ghostly occurrences. Click here to learn more about the ghosts of Hurricane Katrina!