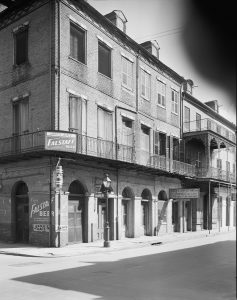 The Chartres House Cafe in New Orleans is known for its spicy Creole seafood dishes. Located on the corner of Chartres and Toulouse, it’s a must-see for any tourist visiting the Big Easy. They’ve even got a spicy Bloody Mary for the experimental foodies out there. But the Chartres House experience isn’t just about food, the intersection at Chartres and Toulouse also has a long history, the kind that invites ghostly spirits into its midst. The building at 540 Chartres is known as the Gally House and is haunted by the ghost of Mrs. Dering, who died there in the mid 19th century. Her ghost has been seen peeking through the second-floor window at night. The servant’s quarters of the Gally House were used as a quarantine room for slaves during the Yellow Fever epidemic. The ghosts of their children still occupy the building, and often reach out and grab onto tourists who walk through the area. There’s also the ghost of a man who committed suicide in the building across the street, who can be seen eerily staring through the windows of his old apartment.

In 1788, a fire exploded throughout the city of New Orleans. The French Quarter was decimated. Over 800 out of the 1,100 buildings standing in the city at the time were completely destroyed. That’s over three-quarters of the city. Hundreds of people died. New Orleans was in ruins. At the time, New Orleans was under Spanish rule. Governor Esteban Miro set up tents for those who were rendered homeless.

Famous New Orleans landmarks like the Saint Louis Cathedral, the Old Absinthe House, and Marigny’s Mansion (now known as Muriel’s), were all either destroyed or took serious damage. The city jail was also destroyed, and the local government did nothing about the prisoners who were locked up inside. They all perished in the fire.

The fire began in the house of Army treasurer Don Vicente Jose Nuñez when a candle was knocked over. Rumors have it that Don Nuñez lived on 540 Chartres Street, the exact location of the Chartres House Cafe today.

After the fire, the lot was bought out by Major Louis Gally. He rebuilt the lot, building what is now known as the Gally House, also known as the Kueffer’s Building, on 540 Chartres Street. Major Gally was known as the founder of the Battlallion d’Artillierie, or the Artillery Battalion in English. This was the first battalion that General Zachary Taylor called for backup when the Mexican-American War broke out in 1846.

Gally erected the building at 540 Chartres for income purposes. The lower floor of the building was meant for business use. The upper floors were residential. There were also spaces in the rear for the kitchen and the servant’s quarters. The rear spaces were connected to the buildings by a series of catwalks. Gally built the space in the most fashionable shopping district of the French Quarter at the time, meaning that he probably got a good return on his investment.

Upon Louis Gally’s death, it was revealed in the New Orleans Times-Picayune that he may have been a soldier of Napoleon while in his twenties.

The Dering family lived on Chartres Street during the 1890s. At the time, Henry Dering ran a tailor shop at 540 Chartres Street, on the first floor of the Gally House. They were a normal, unremarkable couple living in New Orleans, nothing strange going on at all. But when they passed away, there were some unusual shenanigans in how their deaths were reported.

Johanna Dering was reported dead in 1895, at just 24 years old. Her husband, Mr. Dering, was reported to have died a short while later. While Mrs. Dering’s death was of an unknown cause, Mr. Dering was said to have died of a heat stroke while working in his shop. Weirdly enough, some newspapers report that Mrs. Dering actually didn’t die until many years later, when she was about 60 years old. To this day, the mystery of Johanna Dering’s death remains unsolved, but her ghost is said to roam around the vicinity of 540 Chartres Street.

The Reynes Mansion existed for several decades before the 1788 fire, standing on the corner of Chartres and Toulouse right across from 540 Chartres Street. Arnaud Rouche was the first tenant and may have still lived there during the Great Fire of 1788. The building was said to have been completely destroyed in the fire.

A man named Joseph Reynes bought the lot shortly after and rebuilt the house, now known as the Reynes House. Joseph Reynes was a New Orleans socialite, and an influential person in the city. He came from a wealthy Creole family, and served as Secretary to the General Council and the Director of the Louisiana State Bank.

The Reynes Mansion again took damage in the Great Fire of 1794, and Reynes rebuilt the house a year later. A man named Victor Valentinen opened a cafe on the first floor of the Reynes Mansion, which became an iconic New Orleans cafe, attracting notable guests like Tennesse Williams. Victor’s Cafe remained open until 1962.

A new tenant occupied the building, which became known as the Stage Door, a popular bar at the time. But in 2004, the building was renovated, and the Chartres House Cafe moved in.

The Chartres House Cafe opened in 2004, in the building known as the Reynes Mansion. They were a huge success, serving classic Creole and Cajun dishes like Jambalaya, Blackened Shrimp, and Oysters Supreme. But a few years later, they realized that they were quickly expanding and were going to need more space.

They decided to move across the intersection, to 540 Chartres Street, known as the Gally House. The Gally House provided the Chartres House Cafe with the kitchen and dining space they needed to fully thrive as a restaurant.

Today, the Chartres house Cafe is touted as one of the best restaurants in New Orleans. Locals say their specialty is crawfish. They serve crawfish cakes, crawfish pasta, crawfish tails, and a spanking etoufee. They also serve local beers and a spicy Cajun Bloody Mary.

Ghosts of the Chartres House Cafe

The Chartres House Cafe occupies a building, or better yet an intersection, with a lot of history. The corner of Chartres and Toulouse are stained with blood and the memories of the souls who made New Orleans. While many go for the shrimp and crawfish, paranormal enthusiasts show up for the ghosts.

The most famous spirit at the Chartres House is that of a strange figure dressed in 1970s clothing. Nobody seems to know who exactly the man is. According to some stories, he’s the ghost of a man who committed suicide in the Reynes Mansion in the 1970s, when it was being used as an apartment building. He’s been seen standing at the windows of the Reynes House, or at the intersection of Chartres and Toulouse, giving passersby blank stares and generally giving people the creeps.

Others who have entered the rear buildings of the Chartres House have reported some especially creepy phenomena. The so-called former servant’s quarters were actually used to house slaves and their children in quarantine during the Yellow Fever epidemic. The children of the slaves still live on in the building. Many report feeling the tiny hands of the children reach out and touch them, often clinging onto their clothing. Passersby who dare to reach into the barred windows have felt the children grab onto their hands, which has put the fear of god into quite a few tourists. Some have even reported the sounds of people crying and sobbing emanating from the servant’s quarters.

The ghost of Johanna Dering is also said to haunt the Chartres House. Mrs. Dering was said to have died of unknown causes. Some newspapers reported her dead at 24, and others at 66. Those who have seen her ghost report seeing a young lady standing at the second-floor window of the Chartres House, indicating that she may have died at 24. Although, nobody knows if the ghost is actually that of Johanna Dering.

New Orleans is known for its banging cuisine. Creole and Cajun is the name of the game. French, Spanish, and Soul food come together to make this city a foodie’s paradise. But these restaurants are all to often haunted, serving up some spook along with those beignets. Check out Arnaud’s, one of the last four real Creole restaurants in the city. The ghost of Count Arnaud might appear if something goes wrong, as he’d hate for his name to be tarnished. Check out the Court of Two Sisters! The history of this restaurant is as rich as the food. Heck, you have to be rich to eat at this place! Both Marie Leveau and Jean Lafitte have history here, and some say they’ve seen fairies floating around the courtyard. Check out the spirits at Brennan’s! This Irish restaurant is a one-of-a-kind in New Orleans. Home of the Bananas Foster, look out for strange apparitions behind the flame of the flambee. You should also check out the top ten most haunted restaurants in New Orleans right here!