The Great Fires of New Orleans 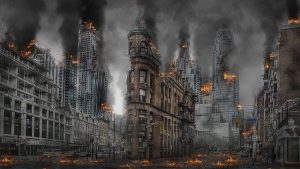 New Orleans is no stranger to tragedy. Early in its history, two huge fires tore through the heart of the city, changing the face of the French Quarter for years to come. The Great Fires of 1788 and 1794 collectively destroyed nearly a thousand buildings, leveling most of the city. While the buildings were rebuilt, the fire left a spooky legacy that remains to this day. Famous haunted landmarks like the St. Louis Cathedral and Muriel’s Jackson Square were destroyed in the fire. But as strong as the Big Easy is, the people always bounce back. The city was rebuilt, but the ghosts left behind by the fire still haunt the city streets.

On the sunny March afternoon, a fire sparked in the home of Don Vicente Jose Nuñez, the Treasurer and Paymaster of the Spanish Army. Nobody knows what sparked the fire, but we know it spread pretty darn quickly. A strong breeze helped push the flames through the city, aided by the mostly wooden structures that lined the streets. It took just five hours for the blaze to consume the city, destroying the prized homes of the city’s wealthy socialites, businesspeople, politicians, and generals.

By the next morning, the blaze had destroyed 856 out of the over 1,100 standing structures in New Orleans; well over three-quarters of the city’s area. The fire consumed the city’s church, jail, armory, army barracks, and town hall. People died, families lost their homes, and there was no effort to save the prisoners, who all perished. The governor, Esteban Miro, set up tents for the homeless in the aftermath of the fire.

Lives could have been saved, but because it was Good Friday, the priests refused to allow the church bells to be used to alert the townsfolk. This included Père Antoine of the St. Louis Cathedral, which was destroyed in the fire. The public placed a lot of blame on Père Antoine for not ringing the church bells.

New Orleans is a resilient city, and after the tragedy, they got right to work rebuilding the burnt-out French Quarter. The wooden structures were replaced with stone and masonry. The people of the Big Easy spent the next six years rebuilding, only for tragedy to once again rear its ugly head.

The Blaze Strikes Back: The Great Fire of 1794

The second New Orleans fire was ignited in December of 1794. Nobody knows what started the fire, but there are quite a few theories. The fire started on a Catholic holy day, known as the Feast of the Immaculate Conception, which was the unofficial beginning of the Christmas season. Many speculate the fire was started by a candle which was knocked over during the festivities, but since there aren’t any official records stating how the fire started, well never truly know.

The fire struck just six years after the last big fire, but the devastation was minimized by the lack of structures to burn as well as the fireproof brick-and-mortar used to rebuild the city. Only 212 buildings were destroyed this time, much less than in 1788. Among the buildings lost was the royal jail. While the Saint Louis Cathedral took some damage, it remained standing.

The mansion of Pierre Phillipe de Marigny, now known as Muriel’s, was partially damaged in the fire. Pierre Antoine Lepardi Jourdan bought and rebuilt the home for his family, restoring the mansion to its previous grandeur. As much as he loved his luxurious mansion, he was a gambler who couldn’t control his instincts. In 1814, he bet his prized possession on a poker game and lost it all. Jourdan was crushed. He committed suicide on the second floor, ensuring that he’d never have to give up his mansion.

Pierre Jourdan still hasn’t gotten over his loss. His ghost still roams around Muriel’s, appearing as a cloud of sparkling lights. He’s been known to move objects around the room, seemingly causing them to levitate.

Before the Old Absinthe House, another bar occupied the space at 240 Bourbon Street. It was just as lively, having been a Bourbon Street staple for 36 years. When the Great Fire swept through, only the fireplace was left standing. A strange twist of irony. The building was rebuilt by Pedro Front and Fransico Juncadelia, two Spanish grocers who took a chance on the New Orleans bar scene. What they created was a legacy that would last over two centuries.

The Old Absinthe House served as the setting for a meeting between Jean Lafitte and Andrew Jackson, a rendezvous that helped save New Orleans. Jackson needed help defending the city, which only Lafitte could do. Lafitte needed his ships back and a presidential pardon, which he could only achieve by caving into General Jackson’s demands. They joined forces and beat the British in the Battle of New Orleans during the War of 1812.

Today, the ghosts of Jean Lafitte and Marie Leveau can be seen enjoying a drink or two. While Ms. Leveau is known to relaxingly sip her drink while staring through the window, Lafitte is a bit more raucous. The spirits of he and his men can be seen, or more often, heard, loudly drinking on the second floor.

The Saint Louis Cathedral is the oldest functioning cathedral in the US. It played a major role in the fire of 1788 when Père Antoine refused to ring the church’s bells to alert the city of the oncoming blaze. As a result, most of the city, including the church, was destroyed. The adjacent buildings, the Cabildo and the Presbytere, were also destroyed. The church was rebuilt in the coming years, only to take on more damage in the fire of 1794. The church remained standing, and within the same year, the Diocese of New Orleans declared the St. Louis church a full-fledged cathedral.

The St. Louis Cathedral saw more tragedies in the coming centuries, surviving a bombing and two hurricanes, including Katrina. Its status was elevated to a basilica in the 1960s, but it’s still referred to as a cathedral by the locals.

The ghosts of Père Antoine and Père Dagobert can be seen walking the halls of the church as well as the adjacent alleyways. They’re usually heard singing Catholic hymns as they slowly stroll through Jackson Square. The ghost of Delphine LaLaurie has also been spotted in the church, presumably begging for forgiveness after performing gruesome experiments on her slaves. The ghosts of Jean Lafitte and Marie Leveau are also rumored to be seen near the church.

Le Petit Theatre is the only building on this list that was destroyed in the fire of 1794. The building that stood on 616 St. Peter Street was built in 1789 just a year after the first fire. Nobody knows what it was used for, but it was all but destroyed in 1794. The building was then rebuilt as a mansion for the last Spanish governor of Louisiana, Don Manuel Mayoso de Lemas. It saw several uses after the Spanish left the city, including as an army barracks for Union soldiers, a cafe, and finally, the Le Petit Theatre.

Today, the theatre is one of the most haunted buildings in New Orleans. At least 40 ghosts are said to roam around the building. Many of them are the ghosts of the Union soldiers who used the building during the city’s occupation. Many claim to hear them discussing military strategy, but the physical source of the conversation has never been found. Other ghosts that haunt the theatre include the ghost of a Black slave who eternally waits outside for his master, a former theater manager who committed suicide, and an aspiring actress named Caroline.

The Great Fires that ripped through the city created a lasting legacy that haunts the city to this day. Just 20 years ago, an even bigger tragedy left the city in ruins; Hurricane Katrina. Thousands died, and hundreds of thousands were rendered homeless, having become some of the earliest refugees of the climate crisis. The hurricane left behind abandoned buildings and ruins that haunt the city to this day. Lindy Boggs Medical Center was a state-of-the-art hospital, known for organ transplants. The day the storm hit, hundreds of patients were left stranded, and dozens died as the facility lost power and ran out of vital medical supplies. Today, it sits abandoned and is home to several ghosts. Charity Hospital was another medical facility rendered useless by the storm. It was abandoned as is, with medical equipment and medicines remaining as they were the day of the hurricane. Locals claim to see lights and strange figures moving around the building at night. The abandoned Six Flags has become a nightmare theme park. The old rollercoasters are now plastered with graffiti, and killer clowns are known to roam the premises. While people are encouraged to stay away, many thrillseekers enter at their own risk. Click here to read more about the ghosts of Hurricane Katrina!