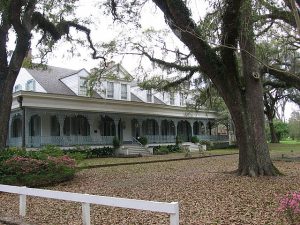 The Myrtle Plantation is over 100 miles from the lively streets of New Orleans, but it’s so full of ghosts that it might as well be in the heart of the French Quarter. Today, it’s a bed and breakfast, and is touted as one of the most haunted houses in America. It was built in 1796 by David Bradford, one of the leaders of the Whiskey Rebellion, and happened to conveniently place the plantation on a Tunica Indian burial ground. The ghost of a Native woman who is believed to be buried there is one of the many ghosts seen on the plantation. Then there’s the spirit of Chloe, a slave who poisoned her masters for revenge. Her fellow slaves killed her, and now her ghost appears in the middle of the night, eerily standing over the beds of unsuspecting guests. The spirit of one of her victims also appears in the house. The young girl has been spotted peeking through the second-story windows. William Winter is the most famous ghost of the Myrtle Plantation. He was shot dead on the porch by an unknown assailant, and now his ghost can be seen crawling up the stairs, begging for mercy.

Early History of the Myrtle Plantation

General David Bradford was the lawyer and Deputy-Attorney General for Washington County, which at the time was claimed by both Pennslyvania and Virginia. He had become a prominent figure in the Whiskey Rebellion, primarily a protest against the high taxes on Whiskey. The fiasco was one of the first tests of the power of the newly formed American government, and so George Washington sent troops to arrest the leaders of the rebellion.

One of the arrest warrants was for Bradford. Well aware of his situation, he fled, making his way to the Spanish territory of Louisiana. He built a home and plantation, then called Laurel Grove, where he lived alone for several years. He was eventually pardoned by President John Adams, then sent for his family to move onto the plantation.

Bradford died in 1808, and his wife Elizabeth took over the plantation. She sold it in 1817 to Clarke Woodruff, a close family friend of the Bradfords who had married their daughter, Sara Mathilda. The Woodruffs themselves had three children; Africa Gale, James, and Mary Octavia.

In 1823, tragedy struck the Woodruffs. Sara Mathilda, Africa Gale, and James all died of Yellow Fever. Some rumors say they were actually poisoned by a young girl named Chloe, one of their slaves. Clarke and Mary Octavia, the last two surviving members of the family, left the plantation in the 1830s, selling it to Ruffin Gray Stirling. Stirling died shortly after, and control of the plantation was passed down to his wife. The property was renamed the Myrtle Plantation after the many crepe myrtles that grew in the area.

The Myrtle Plantation is rumored to have been built on an Indian burial site. Specifically, it was built on a burial ground of the Tunica peoples, who were known to live in the Mississippi River Valley. Many say the paranormal activity at the home is due to the spirits of those who are buried underneath the plantation. The ghost of a young Indigenous woman has also been spotted around the plantation property.

The Legend of Chloe

While records indicate that Sara Mathilda and two of her children died of Yellow Fever, legends have it that they were actually poisoned by a slave named Chloe. Clarke Woodruff had taken a liking to Chloe and began to force himself on her. Chloe had no choice; if she didn’t give in to his demands, she would be publicly flogged.

Chloe wanted revenge. She listened in to Clarke and Sara Mathilda’s business dealings, hoping to catch secrets that could be used against them. Either Clarke or Sara caught her eavesdropping while looking through a keyhole, and they had one of her ears cut off as punishment. Afterward, she wore a green turban to cover up her missing ear.

Chloe formulated a plan. She baked the Woodruff family a cake. She also boiled down some oleander leaves, which are toxic, and poured the extracts into the cake mix. She wanted to get the Woodruffs sick, then nurse them back to health, which would once again put her in good standing with the family. Although, some say that Chloe wanted to kill them outright.

Whether or not her plan backfired depends on her intentions. If she wanted them dead, then Chloe sure did succeed. Sara, James, and Africa Gale all died after eating the cake. The other slaves, not wanting to get in trouble for “harboring” Chloe, kidnapped her in the middle of the night. They killed her by hanging and tossed her into a nearby river.

While some say the story of Chloe is a work of fiction, many swear by it. The ghost of Chloe has been seen around the house at night, usually standing over the beds of sleeping guests. Several visitors to the Myrtle Plantation have reported seeing the ghost of a young Black girl wearing a green turban in different areas of the house. One photographer even caught a photo of her while surveying the property for an insurance company. The photographer insists that nobody was standing in that spot the day he took the photo.

The ghosts of the children who were poisoned have also been spotted in the house. The daughter, Africa Gale, appears in the room where she died. Other guests have seen her from outside the house, staring through the upstairs window. Some say she bears an uncanny resemblance to the young girl who is the subject of a painting in the game room.

The Ghost of William Winter

Mrs. Striling hired attorney William Drew Winter during the Civil War to help handle the plantation’s finances. After the war, they found themselves dead broke. Their assets had been based in Confederate currency, which had become worthless after the war. They had to sell the plantation but were able to buy it back two years later.

In 1871, Winter was mysteriously shot dead on the plantation. Rumor has it that a man named E.B. Webber was the triggerman, though it’s unknown why Winter was targeted. Winter was shot on the front porch, but walked into the house while wounded and attempted to climb the stairs, dying on the 17th step.

The ghost of William Winter is one of the most encountered ghosts in the Myrtle Plantation. Many have heard his footsteps stumbling up the stairs at night. While some are fooled into thinking the sound is another guest, those who investigate are startled when they find nobody in the stairwell. Some have even seen a trail of phantom blood leading from the porch into the house. Some have even seen his apparition crawling up the stairs, begging for help.

More Spirits of the Myrtle Plantation

The ghost of a young girl who died in 1867 also haunts the Myrtle Plantation. She died of unknown causes, but a Voodoo priestess attempted to save her by performing magic rituals, which ultimately failed. Her ghost has been spotted in the room where she passed away, and guests claim to have woken up to a young girl practicing Voodoo on them while they slept.

During the Civil War, three Union soldiers attempted to loot the Myrtle Plantation. They didn’t last very long and were shot dead on the premises, purportedly by Confederate soldiers. Some years later, a maid attempted to clean the bloodstains from the floor, but the stain just wouldn’t come off. Some say they’ve seen the bodies of the three soldiers lying in a pool of blood on the first floor of the house.

New Orleans is a paranormal paradise. Behind the great food, lively culture, and colonial architecture, lies a haunted underbelly that keeps tourists on their toes. The ghost of Jean Lafitte roams around the city, still partying with his pirate cronies. He was known for his aggressive smuggling and pirating skills, which earned him quite a fortune. His old Blacksmith Shop is still standing in the French Quarter today. The ghost of Marie Leveau also walks the streets of New Orleans. This Voodoo Queen damn near ran the city, performing rituals in exchange for the secrets of the most powerful people in the city. Her ghost can be seen at the St. Louis Cemetery, hanging out near her grave. The spirits of both Marie and Jean can be seen having a drink at the Old Absinthe House in the French Quarter. Want to see more haunted Louisiana? Check out the top ten most haunted spots in the Pelican State right here!