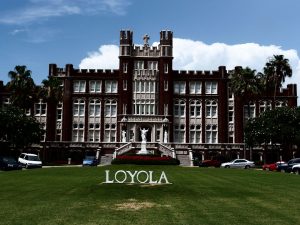 You can’t even get an education in New Orleans without getting spooked! Students at Loyola University New Orleans have been getting their learn on since 1904. Loyola is a private Jesuit University, founded by members of the Society of Jesus, some of whom were among the earliest settlers of New Orleans. The college was officially chartered as a university in 1912. From its inception, Loyola University students have experienced some strange and unusual phenomena. Many of these strange occurrences seem to be centered around Marquette Hall, which currently serves as the administration building. Marquette Hall once held a morgue on the fifth floor. Since there were no stairs going to the fifth floor, school officials used a crane to hoist up the bodies. The students at Loyola became quite accustomed to the sound of the crane, which signified that another body was being lifted. Marquette Hall is also home to the main theatre for the Performing Arts Program, and students have reported seen theatre apparitions for decades. The ghost of a woman in a long white dress is the most commonly seen ghost, and staff say that she’s been a presence in the theatre since the 1960s. An exorcism also occurred at Loyola around this time, happening at an all-girls dorm at Buddig Hall. Students who were experimenting with a Ouija board unknowingly released demonic spirits into the dorms, which causing havoc, even raising the spirit of the Devil himself.

Loyola University: Founded by the Jesuits

The Society of Jesus, also known as the Jesuits, is a religious order of the Catholic Church founded by Ignatius of Loyola in 1540. Jesuits are best known for their cultural and educational pursuits, having established numerous colleges and universities around the world and fostering unity between the various Christian denominations.

The Jesuits came to New Orleans with early French colonizers and were among the first settlers of Louisiana. Due to their culture of education, the Jesuits were tasked by the French with communicating with Indigenous peoples, as they more easily learned Native languages and had a “pacifying effect” on them. The Jesuits failed in their mission, and as a wave of Jesuit suppression swept through Europe, the society was expelled from Louisiana by the French monarchy in 1753. They were forced into hiding until 1814 when the Pope restored the Jesuits to their former provinces.

In 1904, the Jesuits in New Orleans founded Loyola College on a section of plantation bought by the society a few decades earlier. The college didn’t have its own buildings until 1907, with the first classes being held in a house behind a church. In 1910, Marquette Hall was built and served as the main lecture hall for most of the school’s existence.

Loyola College became institutionalized as Loyola University in 1912. The university began absorbing smaller Jesuit institutions into its campus, expanding to keep up with increasing enrollment. By the end of World War II, Loyola University had established schools for law, dentistry, business, and the arts. In 1952, Norman Francis became the first African American admitted into Loyola.

The university continued to expand. Monroe Hall was built in 1960, the largest academic building to date. In the 1970s, Loyola University made the decision to switch to a broader curriculum in an effort to shy away from its religious background. They also moved away from their traditionally Jesuit governance, opting for more secularism. Shortly afterward, Loyola began to attract students from all over the country as it became a higher profile university.

When Hurricane Katrina struck, Loyola suffered extensive damages. The Fall semester of 2005 was canceled, but classes resumed in 2006. Loyola was the first college in New Orleans to resume classes after the hurricane.

The students at Loyola University have become accustomed to studying while avoiding the spooky shenanigans around campus. From corpses on cranes to theatre ghosts to exorcisms, Loyola has seen it all. Most of the hauntings seem to center around Marquette Hall, one of the university’s oldest buildings.

Built in 1910, Marquette Hall served as the main lecture building for most of the school’s history, though it now serves as the university’s main administration building. As you approach Marquette Hall, the first thing you might notice is the building’s architecture. Built like an old medieval castle, Marquette Hall projects a creepy aura.

From 1916 to 1966, Marquette Hall had a morgue on the fifth floor. The morgue was for anatomy students to dissect cadavers as part of their very macabre hands-on learning experience. Instead of taking the corpses up by stairway, the school used a crane to hoist the bodies up to the fifth floor. The “corpse crane” became part of everyday life at Loyola, and the students quickly became accustomed to the groans of machinery, which indicated another body being lifted. On especially windy days, the sheet that covered the bodies would partially blow off, exposing arms, legs, and sometimes the whole body if the students were lucky. Though the crane is long gone, the groaning and screeching sounds of the rope and pulley can sometimes still be heard in the dead of night. The fourth and fifth floors also still hold some of the dark energy from the years spent as a morgue. Students and staff often report abrupt temperature drops, doors flying open and slamming shut, and lights flickering on and off. These occurrences only happen on the fourth and fifth floors.

The third floor of Marquette Hall holds the main theatre for the Performing Arts School. Students and theatre staff often report seeing ghostly apparitions and silhouettes. The theatre balcony seems to be where many of the spirits congregate. During a rehearsal in 1967, the theatre manager saw the full apparition of a woman in a long white dress and long flowing black hair. The sighting caused the manager to flee the building. Several other students claim to have seen the woman’s ghost over the years. She’s often seen on the theatre’s right side balcony overlooking the stage. The theatre’s safety lights are kept on at night for security reasons, though many students believe otherwise, referring to the lights as “the ghost lights.” They say that the theatre staff leave the lights on so the woman can perform on stage when nobody’s looking.

In 1968, a group of young female students at the all-girls dorm in Buddig Hall decided to test their luck with a Ouija board. After a few weeks of what they thought were board games, the girls made contact with a spirit named Hazel. Hazel was a Creole woman from New Orleans whose husband had been wrongly accused of a crime. Hazel’s husband died in prison, and Hazel later revealed that she herself had committed the crime, and her husband had taken the fall. The girls became obsessed with the Ouija board after the encounter and continued to attempt to contact Hazel.

One night, the girls took the Ouija board to the dorm of a fellow student named Neil. Hazel then used the Ouija board to instruct the girls to kill him, spelling out the phrase “Cut Stomach, Kill Neil.” The next day, Neil had painful stomach cramps and was admitted into the hospital. It turns out that he had appendicitis. Doctors operated on Neil, cutting his stomach open and removing his appendix.

Afterward, increasingly sinister messages were being spelled out on the Ouija board. It turns out that the girls were no longer speaking to Hazel, but a spirit that claimed to be Satan. The girls didn’t believe it was really the Devil, so they asked for proof. The lights went out in the room, and the spirit targeted Brenda, one of the students. A blue flame appeared over her head, and her face morphed into demonic shapes.

The girls then went to Father Cohen for help. Cohen was the Associate Director of the Campus Ministry. He told them to stop playing with the Ouija board, lest they make the situation worse. The girls didn’t heed the warning. After a few weeks, strange occurrences began happening in their dorm. The girls would wake up to strange noises. The demons began to terrorize the girls. They threw their belongings around the room and shook their beds as they tried to sleep. Again, they called Reverand Cohen.

Cohen performed an exorcism on the dorm. He sprinkled holy water around the room as he sang prayers in Latin, and instructed the girls to sing with them. The girls never again had any encounters with the demon. The incident gained national media attention, and books and movies about exorcisms became common shortly afterward.

Loyola University annexed Greenville Hall in 1989. The building was once a Catholic academy for women, called Saint Mary’s Dominican College. Legends say that a pregnant nun hung herself from the cupola that sits atop Greenville Hall, trapping her spirit inside the building for all eternity. There are also rumored to be underground passageways under Greenville Hall which are littered with bones and human remains. Students, staff, and even security guards have witnessed strange apparitions and heard disembodied voices around the campus. The spirit of what many believe to be the pregnant nun has been known to mysteriously appear then vanish into thin air.

Read more about the haunted history of New Orleans!

There isn’t a corner in New Orleans where you won’t find a ghost. Its long history and mix of cultures have created a unique breeding ground for spooky spirits. Catch a show at Le Petit Theatre, but watch out for the 40 or so ghosts that live inside. Swing by Lafitte’s Blacksmith Shop, and meet the ghost of the greatest pirate of the 18th century. You should also read about Marie Leveau and her Voodoo practices. Read up on the top ten most haunted places in New Orleans before planning your trip!