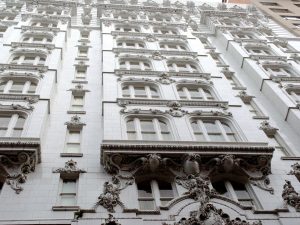 When Antonio Monteleone came to America from Sicily at the turn of the century, little did he know that he would end up building one of the most unique hotels in the world. The Hotel Monteleone is a beautiful Beaux-Arts style hotel in the French Quarter, known for high-class luxury, history, and the only rotating bar in Louisiana, called The Carousel. The hotel is one of three hotels in the country to be designated a literary landmark by the Friends of the Library Association. Countless authors from around the country, and particularly the South, were frequent guests at the Monteleone. Among them, Ernest Hemingway, Tennessee Williams, and William Faulkner. Many of the writers also reference the hotel in their books and short stories. The Hotel Monteleone is also one of the city’s haunted hotspots. The 14th floor, which is technically the 13th floor, is where all the ghosts seem to hang out. According to the staff, the spirits tend to be friendly, but that doesn’t mean they’re any less frightening. The 14th-floor hallway turns into a hangout spot for Progressive Era children late at night, scaring guests who don’t expect it. The ghost of Maurice Beger might make an appearance as well. The young boy died at the hotel due to a tragic illness and is now known to play pranks on unsuspecting guests.

Antonio Monteleone and the American Dream

Italian cobbler Antonio Monteleone ran a modest shoe shop in Sicily. Sometime in the 1880s, he grew tired of his small-town shop and set sail for America, the land of opportunity. Finding his way to New Orleans, Antonio continued doing the only thing he knew how; fabricating fine footwear. He set up a shoe shop on Royal Street, considered the center of the high society in New Orleans. The small-time shoe shop prospered, and Antonio set his sights on entrepreneurship.

In 1886, a small hotel on Royal Street, the French Quarter Hotel, was put on the market, and Antonio jumped at the opportunity. Shortly afterward, the next-door Commercial Hotel was also put up for sale. Antonio bought that hotel also. The small-time Italian shoemaker had taken his first step towards building an empire of luxury hotels. Antonio was living the American Dream.

Antonio combined the two hotels and kept the name of the larger establishment, the Commercial Hotel. He continually expanded the hotel, adding 30 guest rooms in 1903. In a major move, he commissioned architects to construct 300 more guest rooms in 1908, during an economic downturn. He then gave the hotel its current namesake, calling his masterpiece the Hotel Monteleone.

Antonio died in 1913, and his son, Frank, took over the hotel’s operations. Hotel Monteleone pulled in guests, even through Black Monday and the Great Depression, and was the only hotel in New Orleans to stay open during the crash. By this time, Frank’s son, Bill, was running the hotel, being the third generation of the Monteleone clan to do so.

Significant changes came in 1954. The building was beginning to age, and the original fixtures were falling apart. Bill had the whole hotel demolished and began laying the foundation for a massive new building. The revamped Hotel Monteleone was built in the classical French Beaux-Arts style, complimenting the theme of New Orleans. The new building was taller and outfitted with more guest suites. Bill also added ballrooms, dining rooms, two cocktail lounges, and a sky terrace with swimming pools. The Hotel Monteleone became one of the premier hotels in the city.

In 1949, the Carousel was built into the hotel. The Carousel is carnival-themed, and is the only rotating bar in the state of Louisiana. During its early days, the bar was right next door to a hip nightclub called the Swan Room, where big name musicians like Liberace and Louis Prima played their tunes to a jazzy crowd. Even today, you can probably spot a few celebrities having a drink here. The Carousel takes about 15 minutes to make a complete revolution.

The Hotel Monteleone was hugely popular with writers in the early and mid 20th century. Countless authors frequented the hotel, even including it in their writings. Ernest Hemingway, Tennessee Williams, and William Faulkner were known to almost always stay at the Monteleone when they came to New Orleans, as did Anne Rice, Stephen Ambrose, and John Grisham. The hotel also made appearances in their writings. Tennessee Williams referenced the hotel in The Rose Tattoo and Orpheus Descending. Rebecca Wells included the hotel in her novel Divine Secrets of the Ya-Ya Sisterhood. Ernest Hemingway referenced it in his short story Night Before Battle.

Writer and novelist Truman Capote claimed to have been born at the hotel. While this may not be particularly true, the reality isn’t too far off. His mother lived in the hotel during his pregnancy, but she made it safely to the hospital in time for his birth.

The hotel’s famed bar, the Carousel, is also frequented by writers, and like the hotel, is often featured in their stories and novels.

In June 1999, the Friends of the Library Association made the Hotel Monteleone a Literary Landmark. The only other hotels to have this designations are The Plaza and The Algonquin, both in New York City.

The Ghosts of the Hotel Monteleone

There’s no such thing as a century-old hotel that hasn’t got a few ghosts hanging around. Even less so in New Orleans. The ghosts at Hotel Monteleone tend to hang out on the 14th floor, which unironically is actually the 13th floor.

One of the hotel elevators tends to stop on the 14th floor on its own, almost as if it’s luring guests to take a haunted stroll down the hallway. On one occasion, this happened while a drunk and flirty couple were getting busy on the elevator, and they unknowingly got off on the 14th floor. While getting lost in the hallway looking for their room, they began seeing the ghosts of young children. As they continued walking down the halls, the air grew colder, and when they turned a corner, they saw the apparitions of dozens of children playing in the hall, dressed in early 20th-century clothing. The children all stopped playing to stare at the couple. Shocked, they turned around, and high-tailed it back to the elevator.

On another occasion, a mother and her two young daughters were staying on the 15th floor. Every time they took the elevator, it stopped on the 14th floor instead. Her daughters, understandably frightened, no longer wanted to take the elevator and would rather make the 15 story trek up the stairs. The mother left her children in the room and tested the elevator out by herself. After riding it up and down the building a few times, she assured her children that it was safe. The next time the family went downstairs, the elevator once again made a stop on the 14th floor. It seems the children of the halls just want someone to play with.

The ghost of a young boy named Maurice Begere also haunts the 14th floor. Maurice Begere often stayed at the hotel with his parents, Jacques and Josephine. They usually spent their weekends between the Hotel Monteleone and the French Opera House on Bourbon Street. Children weren’t allowed at the opera, so Maurice was often left at the hotel with a nanny. One night, Maurice contracted a terrible illness. He had an abnormally high fever, and began having convulsions. Maurice died that night. His parents returned to find their son dead in the hotel room. Josephine was devastated, and was compelled to return to the Hotel Monteleone every weekend in an attempt to contact her son’s spirit. Eventually, she was successful. Josephine was brought to tears as her son spoke to her. “Don’t cry mommy, it’s ok,” he said.

The spirit of Maurice Begere still roams the halls of the 14th floor, where he died. Guests might hear his childish laughter as his spirit walks in and out of their room at night. He usually seems to be playing, or looking for his parents. He more than likely hangs out with the other ghost children on the 14th floor.

In 2003, the International Society of Paranormal Research did an overnight investigation at the hotel. They found at least a dozen spirits, including the spirit of Maurice Bergere. They also found the ghost of a former employee named William “Red” Wildermere. Red died in the hotel of natural causes, but his spirit still lingers, albeit quielty. The investigation also found the ghosts responsible for messing with a deadbolt on one of the restaurant doors. Where it normally requires a button to be pressed in order for the bolt to unlock and open the door, every other evening or so the door just opens on its own. Apparently, there is an ongoing feud between two ghosts who used to work in the hotel restaurant while alive. One was a chef, and the other a server. One prefers to have the door open, and one prefers the door closed, leading to a constant battle between the two spirits.

Learn more about the haunted history of New Orleans!

The Big Easy is not for the faint of heart. Terrors lie on every corner of this haunted city. From the LaLaurie Mansion and the ghost of Delphine to the brutal murders of the Axeman, New Orleans has seen it all. With such a long and haunted history, creepy ghost stories have become the norm. More recently, Hurricane Katrina brought even more terror to the city when it struck in 2003, leaving thousands dead and entire swaths of the city level, and leaving buildings like the former Charity Hospital abandoned. If you want to learn about more haunts, you should read about the top ten most haunted places in New Orleans.