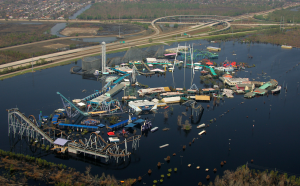 Imagine being at a theme park where hundreds or thousands of people visit it a day. Now imagine it being abandoned all of a sudden and stays that way for well over a decade after a nasty storm blew through the city, resulting in one of the costliest and deadliest natural disasters in American history. The Old Six Flags New Orleans still stands today almost 15 years after Hurricane Katrina barrelled into The Big Easy, resulting in well over a billion dollars of damage and untold lives taken. Most of the park still stands, but still rotting away from the inside and out. But when you step into the grounds of the park, it’s like being in a place frozen in time. It’s almost the same in some of the other buildings that had long since been abandoned (and have yet to be reopened). But is the former Six Flags in New Orleans packed with paranormal activity as some say it is? Or is it an eerie sight to behold with no ghostly spirits nearby. For the hair raising details, we will talk about the park and what kind of interesting stories have been told about the place well after Katrina unleashed her wrath on the Gulf Coast. 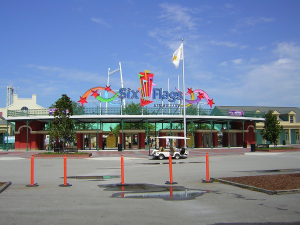 The park was originally known as Jazzland, which paid homage to the rich jazz history and culture that took place in New Orleans. It spanned nearly 140 acres and was operated by Alfa Smartparks, a subsidiary of a Spanish-based company named Parques Reunidos. The theme parks were packed with all kinds of amusements like rides, games, and entertainment options.

One of the most notable rides was known as the “Mega Zeph”. The roller coaster ride was made from wood but was made with a steel frame to prevent any termite infestations from destroying the ride itself. The steel frame had also enough strength to withstand hurricane-force winds. The Mega Zeph was a reincarnation of a roller coaster that was popular at a since-closed amusement park that was situated near Lake Pontchartrain. However, the location of Jazzland was situated just on the opposite side of the lake where the old Lake Pontchartrain Beach Park was located.

While a replica was originally planned, it was quickly scrapped due to its size and in its place was a much larger roller coaster. Other roller coasters included a couple of smaller designs like “Rex’s Rail Runners” and the Zydeco Scream. While Alfa Smartparks specialized in water parks, they did include a log water ride along with many other common theme park rides like merry-go-rounds. Unfortunately, the park was not faring well financially. No more than a year after the park opened, the lease was put up for sale with Six Flags purchasing it shortly thereafter. Upon the initial acquisition, Six Flags opted not to change the Jazzland name until 2003 when it was renamed Six Flags, New Orleans.

As the Jazzland name was shed, newer rides arrived to replace the old ones. One of them included an inverted rollercoaster known as “Batman: The Ride”. Other rides that were added to the park were also coming from other Six Flags parks in the southeast. One of them was the looping roller coaster known as “The Jester”, which was a longtime fixture at the Six Flags Fiesta Texas. Things turned around when Six Flags took over the park. It almost looked unrecognizable to many of the usual visitors of Jazz Land. But soon, Six Flags established many rides and amusements that tied into the culture of New Orleans.

However, the park planned on adding a section that was going to be a standalone water park. Plans had begun at the beginning of 2005 with a major announcement that was scheduled for August of that year. But due to Hurricane Katrina, the plans were postponed and later scrapped altogether. The final date of operation was August 21, 2005. With the children returning to school, the business was about to slow down. However, the park was planning to open up for one final weekend before wrapping up for the year. Yet, it never happened as the city was evacuating New Orleans ahead of the hurricane’s imminent landfall.

Since the park was located on the shores of Lake Pontchartrain, a piping system was installed so that Six Flags was protected from any flooding due to any spillage from the lake’s overflow. As expected, when the storm arrived the lake overflowed and therefore lead to flooding when the piping itself failed to handle all the water that was being flowed into the pipes themselves.

By the end of the storm, the entire park was flooded along with at least 80 percent of the City of New Orleans. Since the park was located in a low-lying section of New Orleans, more than 20 feet of floodwater engulfed the entire park resulting in complete devastation once the water levels dissipated. It took nearly an entire month for the water to leave the park itself. Due to the extensive level of damage from the floodwaters and wind, the park was closed indefinitely, despite announcements throughout the next couple of years that it would remain closed “until further notice”.

The only ride that was said to be left unscathed was Batman: The Ride. The reason being was due to the fact that the ride was constructed on an elevated platform that also had corrosion-resistant materials as part of its structure. The ride itself was removed from the park in 2006 and was relocated to Six Flags Fiesta Texas, where it underwent a rebrand the following year as “Goliath”.

Likewise, the water contained corrosive materials that would only accelerate the damage to all the other rides including the roller coasters. As a result, the damage was estimated to be slightly over $32 million.

In July 2006, Six Flags announced that the park was still closed indefinitely (or through 2007) as it was attempting to estimate the damage. The park was considered a “total loss”. Because of this, Six Flags had no intention of rebuilding the park and found itself looking for a way out of the 75-year long lease that it had signed back in 2002. Ray Nagin, who was the Mayor of New Orleans at the time wanted Six Flags to honor the lease and rebuild. Eventually, the park was closed for good citing poor financial figures that had occurred before the storm ever occurred. Prior to the storm, Six Flags had already planned to shut down underperforming parks.

A Place For Thrill Seekers 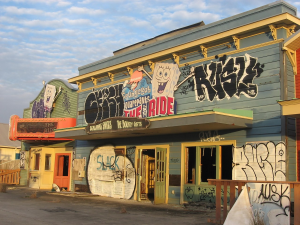 Long after the park’s closure, it had long been a place where thrillseekers and paranormal fanatics would visit simply for its abandoned buildings. While there have been no reports of any ghostly activity, many who have visited the abandoned park have reported having eerie, uneasy feelings at the sight of the dead silence and visions of abandoned buildings riddled with graffiti. One visitor recalled saying that it was like traveling back in time and being the only one there in that time period. Others have reported hearing random sounds of metal clanging and phantom noises.

Despite the City of New Orleans banning anyone from visiting the park, many have ignored the “no trespassing orders” and have taken pictures or videos of their discoveries. As of 2019, Mayor LaToya Cantrell has already discussed the idea with city officials about tearing down the park itself. The demolition project itself is said to be estimated at around $1.3 million.

While we don’t recommend that you break the law, the Old Six Flags New Orleans still stands. Whether people still flock there to get the thrill of a lifetime or not remains unseen. But if you must take the risk to visit there before it’s gone for good, you might be in for the adventure of a lifetime.