The Ghost of Jean Lafitte 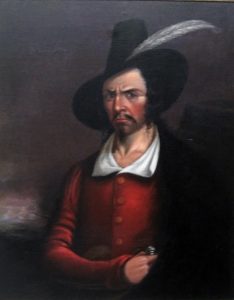 Throughout New Orleans history, there were a few people who really left a mark on the city, leaving behind a legacy that made the city what it is today. Jean Lafitte was one of those people. The legendary pirate was known for his brazen personality, from pirating Spanish merchants to sleeping with the most beautiful women in town. He was a drinker, gambler, and womanizer. He propped up the city’s economy during the US embargo by running a smuggling operation that kept the merchandise moving from the Caribbean and up the Mississippi. After being caught, he helped the Americans fend off the British during the War of 1812 in exchange for a pardon and the return of his ships. His ghost still haunts the city streets, and he can be seen around the French Quarter in some of his favorite hangout spots, along with his band of pirates.

Nobody seems to know where Jean Lafitte really came from, which is strange considering he’s among the most well-known pirates in American history. According to his own diaries, the authenticity of which is up for debate, Lafitte was born in the Basque country in France. It’s believed that he was born between 1776 and 1780, but the exact date is unknown.

Other rumors point to Jean originating in the colony of Saint Domingue, now Haiti. Children of wealthy French landowners often migrated to La Louisiane in adulthood. But it’s unknown whether his parents were wealthy, or if they even owned land. Many accounts point to his parents being Sephardic Jews who fled Spain during the inquisition.

We do know that Lafitte, his older brother Pierre, and his mother were living in New Orleans by 1784. Mama Lafitte married a local merchant named Pedro Aubrey. Pedro taught the young Lafitte boys the ins and outs of the New Orleans trade scene, as well as how to navigate the swampy waterways of the Mississippi Delta.

Jean and Pierre were raised separately throughout most of their childhood, but they reunited as adults. They became business partners, as well as partners in crime. They ran a smuggling operation which they disguised as a blacksmith shop. Jean did the hard work out on the high seas, pirating ships for their goods and discreetly bringing them back to shore. Pierre ran the business operation, selling the stolen wares at the shop. Jean Lafitte’s Blacksmith shop is still standing to this day.

In 1803, the United States bought the Louisiana Purchase, putting New Orleans in American territory. A few years later, in 1807, the US passed the Embargo Act. American ships were no longer allowed to dock at foreign ports, and goods imported to the US were now heavily taxed. The law was a heavy blow to a city that relied on foreign trade with the Caribbean.

Local merchants were starving, but for the lowbrow Lafitte brothers, this presented an opportunity. Jean scouted islands off the Louisiana coastline for a place to move his smuggling operation. Finally, he settled on a small island called Barataria, in Barataria Bay. With so many sailors put out of work by the embargo, Lafitte damn near had his own personal army of sailors and merchants turned pirates.

The island colony of Barataria was a thriving pirate’s paradise. Ships arriving from the Caribbean would secretly dock at Barataria, then workers would load the goods onto small fishing boats to transport the wares across the bayou and into New Orleans. Because Barataria was far removed from the naval base, merchant ships and pirates could discreetly dock without government interference. Jean ran the operations on the island, while Pierre continued to be the face of the enterprise, selling the merchandise out of the shop.

The Lafittes were pulling a nice profit from their smuggling operations, but it wasn’t enough. The two wanted more. Not in terms of money, but excitement. Jean especially was known for his rambunctious personality. Drinking, gambling, fine clothes, women, he wanted it all. The brothers decided that it was time to get back into piracy for themselves.

Over the next few years, the Lafittes acquired three ships, which they used to plunder other merchants, mainly the Spanish. Business was good. One Spanish ship they pirated netted them over $18,000, or just under $400,000 in today’s currency. They had a reputation for treating their captives well, often returning pirated ships to their owners. On the other hand, Jean had no morality as far as what kind of merchandise he stole and resold, which sometimes included people. If Jean pirated a slave ship, he captured and sold the slaves, ignoring their humanity and selling them as if they were any other commodity.

Word was getting out about Jean Lafitte’s exploits. The piracy meant that merchants were bypassing the import taxes. At the outset of the War of 1812, the lost tax revenue was more important than ever. In a series of operations, Pierre, several of his smugglers, and eventually Jean, were all captured. Barataria was invaded, and the Lafittes lost their entire fleet.

The Battle of New Orleans

But it wasn’t for nothing. The Americans needed a plan for New Orleans. It was severely lacking defenses, and they needed competent sailors who knew the bayous to help fight against the British. General Andrew Jackson approached Jean for help. The two met at the Old Absinthe Bar in the French Quarter and laid out the terms of the agreement. Lafitte and his crew would aid the Americans against the British, but Lafitte wanted his fleet returned and a full presidential pardon for him and his men. They sealed the deal.

The Brits closed in on New Orleans in December of 1814, and Lafitte and his mercenaries joined the Americans in a joint coalition. Some on Navy warships and others on Lafitte’s pirate ships. Lafitte helped secure the defenses around New Orleans and the surrounding bayous. When the Brits advanced, they were pushed back by artillery from Lafitte’s mercenaries. The British were outclassed. After all, these weren’t ordinary soldiers. Lafitte and his men learned to battle in conditions far more treacherous than typical seamen.

Upon coming out victorious, General Jackson praised the men for their skills. President Madison gave the Lafittes and company a full pardon and returned their fleet. Jean and Pierre continued their exploits, though this time, they moved to the coast of Spanish America, setting up shop near present-day Galveston.

The Ghost of Jean Lafitte

Jean Lafitte loved New Orleans, and New Orleans loved him. He was known across town for his exploits. His sexual excursions, drinking parties, and gambling sessions were often talked about among the sailors of the time. He also propped up the city’s economy after the Embargo Act of 1807. Jean Lafitte became an integral part of the spirit of New Orleans, and his ghost haunts the NOLA streets to this day.

Jean Lafitte’s Blacksmith Shop is still standing today, and it’s one of the oldest buildings in the city. Legends say that Jean even buried some of his treasure somewhere under the shop. But as we all know the story of a hidden pirate’s bounty, it’s probably going to be cursed. Staff at the Blacksmith Shop claim to have seen a pair of devilish red eyes staring through the cracks in the basement walls, signifying that one might be a little too close to the loot. Others say Jean Lafitte himself appears in the halls if a Frenchmen or Federal officer enters the building.

The spirit of Jean Lafitte is also seen in the Old Absinthe House, where he made his famous deal with Andrew Jackson. Patrons of the bar report seeing Andrew and Jean sitting at a table sharing a beer. But the most striking apparition is seen on the second floor, where many claim to have seen Lafitte and his pirates having a debaucherous drinking session. Quite a few patrons have caught a glimpse of the scene, hearing the raucous laughter for a split second before they all disappear.

Lafitte can also be seen near the St. Louis Cathedral in Jackson Square. His ghost is known to hang out in Pirate’s Alley, which runs just beside the church. The alley was used by black market merchants to sell their illegal wares. Many are skeptical that the ghost is really that of Jean Lafitte, or if it’s some other pirate. Jean sold his merchandise at his shop, but he could have very well used the alley too.

Want to learn more about the history of New Orleans?

Piracy, slavery, Voodoo, Yellow Fever; the Big Easy has seen it all. Some of the characters that made New Orleans what it is today still live on. Marie Leveau was one of those people. She was known as the Voodoo Queen and was admired for her beauty, herbal rituals, and her propensity to acquire high-level secrets. She damn near ran the city, and some say she still does. She hosted weekly Voodoo rituals at Congo Square, and often frequented the Old Absinthe House, where her ghost can still be seen having a drink once in a while. She lived a wild life. When it was all over, her body was laid to rest at the St Louis Cemetery No. 1. Her ghost can occasionally be seen hanging around near her grave. Want to see more haunted New Orleans? Read up on the top ten most haunted spots in the city right here!