The Sultan’s Palace might sound like one of the many hotspots that are scattered throughout New Orleans. But a long time ago in the 19th century, it kind of was. While it wasn’t necessarily a club or a bar, it was the home to a Turk who had traveled the world and spent a great deal of his life living it up. All-night parties were the norm long at this house long before New Orleans was one of the best party cities in the world. However, the reveling was brought to a screeching, bloody halt leaving many of its guests dead (including the owner of the home at the time). Of all the haunted places in The Big Easy, this just might be one of the most haunted of them all. We will dive into the place that was once known as the Sultan’s Palace and tell of the stories that lead to the bloody events of a party that was cut short. If you ever make it to New Orleans, this may be one of those places to check out.

The “Sultan” Moves In

The Sultan’s Palace was originally known as the Gardette-LaPrete House. The home was owned by a wealthy businessman named Jean Baptiste LaPretre, who was of Creole descent. LaPretre’s business had fallen on hard times and was almost at the point of having to sell his home in order to keep his personal finances in order. However, there was a mysterious traveler that had come over from Turkey in search of living the good life in the United States of America. His name was Suleyman. It was said that Suleyman claimed to be a prince from the Turkish Royal Family. However, it was revealed that while his claim was true, he was the brother of a Sultan who had banished Suleyman from the kingdom and was stripped of any official title that would tie him to the royal family. Due to the Civil War ravaging the economy, LaPretre was at the point of desperation where he could have sold the home to just about anyone who was willing to make an offer. LaPretre accepted Suleyman’s offer to rent the home.

As LaPretre left town, Suleyman was settled in and ready to bring a lot of life into a place known as the French Quarter. Before it became party central throughout the neighborhood, the newest resident of the Gardette-LaPrete House was ahead of his time. A ship soon arrived in the Port of New Orleans. Among its passengers were women who dressed sharp and looked like they were ready for a ball. Soon after came many of Suleyman’s servants. Very soon, the home was decorated with valuable artworks, fabrics, and so many artifacts and treasures that might have been worth a fortune then and now. These riches were enough to captivate the attention of the locals who were trying to wonder who was living inside the home that once belonged to a struggling businessman. The entire city had plunged into economic freefall, so who could have possibly lived high off the hog while even some of the city’s wealthiest were struggling? Despite many revelers coming and going almost every night from what was now known as “The Sultan’s Palace”, locals were forbidden to enter the home.

But those who were allowed to set foot on the steps were only allowed to leave gifts and other riches for Suleyman himself. The house situated on 716 Dauphin was a place where parties were ongoing, the scent of opium filling the air, and daily deliveries of gold on the doorstep were commonplace.

Massacre At The Palace 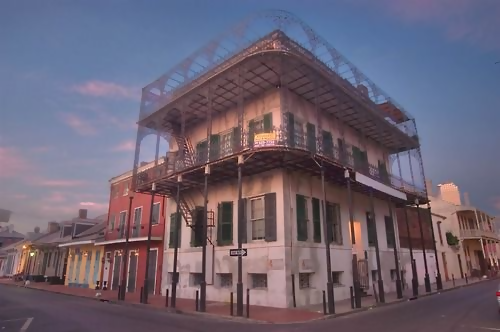 It was a night that was like any other at the Sultan’s Palace. That night, the “Sultan” had another one of his many parties that took place at the home. The weather outside was a frightening sight to see. A nasty storm has battered the city and kept many New Orleans citizens inside bracing for the worst. Meanwhile, the partygoers at the palace seemed to carry on as if there was no fear. The following morning, a local man was passing through the French Quarter and had noticed a trail of blood coming from the Sultan’s Palace. He notified the police of his discovery, only for the police themselves to discover what appeared to be a horrifying sight. The revelers of the Sultan’s Palace were all dead. Many of them were slashed to death by what appeared to be bladed weapons. The so-called “Sultan” was nowhere to be found. Legend says that the Sultan may have been kidnapped and buried somewhere alive.

Long after the murders, there were no suspects or other witnesses that came forward. Thus, it leads to a whole slew of conspiracy theories. Some have said that pirates were landing in New Orleans and had discovered the Sultan’s palace only to plunder it with every ounce of riches the house was covered in and leave no witnesses to chance. Others have said that Suleyman’s brother (The Sultan) may have enlisted some of his soldiers to assassinate him for being such a disappointment to the family.

The party had come to an abrupt and bloody end on a wild and stormy night. And Suleyman’s body was never found even to this day. Whether he was indeed buried alive or if he was murdered and disposed of somewhere else, the haunting story of this massacre lives on in the history books of the City of New Orleans.

While the home had undergone renovations and changes in ownership over the course of many decades, it had long been a place where hauntings had been a regular occurrence. Past occupants of the house have reported seeing the sighting of a man dressed in Middle Eastern garments appearing on the walls of the home, only to disappear moments later. There had also been reports of phantom noises like screaming and shrieking. On some occasions, the sounds of body parts hitting the floor may have been heard.

Local residents passing through the home had also reported hearing chimes going off and smelling different incenses that might have been burning while there were no lights on inside. Even the sighting of a man with dark to light-colored hair was seen peering out one of the windows looking out towards the French Quarter only to disappear sometime later. Some say that it was perhaps the apparition of the many who was only to be known as Suleyman.

What’s Happening To The House Now?

The home still stands even today but is used for private condominiums. Long after the brutal murders, the mansion was still used as a private residence and was at one point owned by the New Orleans Academy of Art. However, the school closed up shop in the 1940s due to World War II drafting many of their students. Since 1966, the old Sultan’s Palace was converted into condos. But one resident named Frank D’Amico recalled hearing his wife panicking at the sight of what might have been a dark figure moving around. D’Amico’s wife was frantically searching for the lamp only to see the figure disappear by the time she turned it on to further investigate the movement. Since it consists of private residences, it may not be open to the public for the purpose of “ghost hunting”.

The Sultan’s Palace may have been the sight of one of the most gruesome murders in the history of New Orleans. And it might be a chilling revelation for the residents of the condos that now occupy the house. Whether the hauntings still occur to this day are still anyone’s guess. But don’t be surprised if you even so much as pass through the old “Sultan’s Palace” and hear some phantom noises in the process.