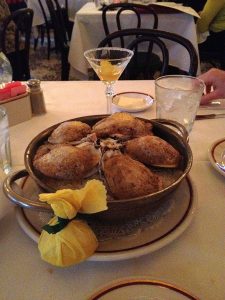 New Orleans is a foodies paradise. The collision of Creole, Cajun, Southern, and Spanish cuisine has brought together a clash of flavors that make the city what it is today. From Jambalaya to Oysters Bienville to a good ol’ bag of powdered beignets, good food in the Big Easy is on every corner. But there’s also another side to the New Orleans restaurant scene; damn near every restaurant is haunted! Even the spirits in this city don’t want to go off into the afterlife without grabbing some delicious grub. There’s no such thing as a free lunch in Nawlins, especially when you’re being watched by a bunch of ghosts. It might be a bit spooky at first, but don’t let the spectres distract you from the city’s delicious eats!

The Jimani Bar once shared a building with one of New Orleans’ most well-known gay bars in the 1970s, called the UpStairs Lounge. The Jimani occupied the first floor, while the UpStairs took up the second and third floors. In June of 1973, the fourth Pride week was coming to a close, commemorating the fourth anniversary of the Stonewall Riots. That’s when the bar’s patrons were the targets of a homophobic hate crime when an unknown assailant set the entrance on fire. In the ensuing chaos, 32 people were killed, and 15 others were injured. The attack was the deadliest crime against the LGBTQ community until the Pulse nightclub massacre in 2016.

Today, the second and third floors of the building remain unoccupied, but the Jimani Bar still operates out of the first floor. Many patrons say the ghosts of those who died are still present in the building, haunting the guests in an attempt to bring attention to this little-known crime. The fire at the UpStairs Lounge was suppressed by the media because it happened at a gay bar. The spirits at the former UpStairs Lounge simply want to raise public awareness of the long-forgotten hate crime.

Owen Edward Brennan was once told by legendary chef Count Arnaud that “an Irishman’s culinary skills always end with boiled potatoes.” That’s when Owen knew he had to prove the Count wrong. He opened up Brennan’s in 1946 and gave New Orleans the biggest breakfast menu the city’s ever seen.

“Breakfast at Brennan’s” isn’t just known for its eggs benedict. The meals at this classic Vieux Carre restaurant also come with a side of haunts. The ghost of Chef Paul Blangé likes to appear to customers who order his signature Bananas Foster. You might see his translucent silhouette while the dish is being flambeed at your table.

New Orleans socialite Pierre Jourdan loved his lavish mansion. After all, he rebuilt it after the Great Fire of 1788. But Jourdan also had a wicked gambling problem. He eventually lost control of his addiction, betting his entire house, and his livelihood, on a poker game with the boys. Unfortunately for Pierre, he was given a bum hand and lost the game. Distraught by his loss, Jourdan committed suicide on the second floor of his prized mansion.

After seeing another death, and several more owners, the building opened as a restaurant, called Chart House, in 1970. It became known as Muriel’s in 2001. The Seance Lounge on the second floor is the room where Jourdan killed himself. Guests of Muriel’s might encounter his spirit as a group of sparkling orbs floating around the room. He’s also known to make objects levitate at random.

The ghost of Count Arnaud still watches over the restaurant. He doesn’t want anyone tarnishing his name. Luckily, he seems pretty pleased with the way the new owners are running things. That doesn’t stop him from spooking the guests once in a while. The Count can be seen hanging out in the dark corners of the dining room with a cheeky grin on his face. His daughter, Germaine, is also known to haunt the adjacent Mardi Gras museum. She tends to float around, making sure no unruly guests touch her prized dresses. She’s also been seen barging out of the lady’s room before vanishing into thin air.

Cafe Sbisa was once a bar that featured an upstairs brothel, which catered to sailors in the 19th century. Sailors would climb up to the second floor to choose whom they wanted to sleep with. Today, it’s one of the finest restaurants in the city, serving up Creole cuisine and seafood accompanied by live music. The Cafe Sbisa was shut down after Hurricane Katrina, but has since been renovated and is now back in business. The restaurant is adorned with paintings by George Dureau.

The brothel has a tragic history, which left behind a few ghosts. A young girl was forced to work in the brothel to pay her father’s debts. She got pregnant by an unknown sailor and thought she would be freed after giving birth. Instead, she was forced to keep working to pay off an accrued debt for “room and board.” She refused to live her life as a sex slave after giving birth to her daughter, so she drowned her child before hanging herself. She and her daughter still haunt the building to this day.

Antoine’s is one of the four Grand Dames of New Orleans, and the home of the famous Oysters Rockefeller. Opening in 1840, the people at Antoine’s claim to run the nation’s oldest family-run restaurant. The world-class eatery has served big names like Franklin Roosevelt, Tom Cruise, Bill Clinton, and even Pope John Paul II.

The ghost of Antoine Alciatore still watches over his restaurant, making sure the place still runs smoothly. He also in competition with the pesky peeps at Arnaud’s, and he wants to make sure that he’s still the King of Creole cuisine in New Orleans.

At the entrance to the Prince Conti Hotel lies the Bombay Club, a lively bar and restaurant. They’ve got over 50 unique cocktails that you won’t find anywhere else. The restaurant also features live musicians and jazz bands.

The Bombay Club is haunted by a former Storyville sex worker. Her curvy figure makes a brief appearance to drunken men, attempting to seduce them before disappearing into thin air.

The Cafe du Monde is probably the most famous restaurant in New Orleans. It’s known for its beignets and coffee, as well as being open 24 hours a day, 7 days a week. First opening in 1862, the restaurant has been a New Orleans staple ever since, and today, patrons might find themselves waiting an hour or more for a seat.

Many say they’ve seen vampires, werewolves, and zombies emerge from the Mississippi while dining at the Cafe du Monde. There’s also a phantom waiter who’s known to take your order and disappear, making you wait that much longer for your beignets.

The ghost of a strange man has been seen standing near the entrance of the Chartres House Cafe. Many speculate that it’s the ghost of a man who committed suicide on the second floor of the building back in the 70s, when the adjacent building was an apartment complex.

The Court of Two Sisters is known for its spicy Cajun and Creole dishes, as well as its live jam bands. The building has quite a long history. It gets it’s namesake from two Creole sisters, Emma and Bertha Camors, who used to run a shop here over a century ago. The restaurant’s courtyard is home to the “Devil’s Wishing Well,” which Marie Leveau used to practice her Voodoo.

The Camor Sisters still reside in the building. Many guests claim to have the strange sensation of being watched while enjoying a meal. Bottles and glasses have been known to vibrate at random. Some chalk it up to the two sisters, whiles others blame the ghost of a newlywed woman who was found dead on the second story of the building in the 1940s.

Want to see more haunted New Orleans? Check out the top ten most haunted spots in the city right here!