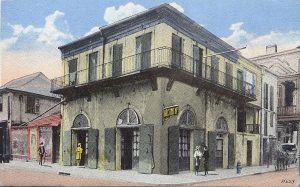 The Old Absinthe House on Bourbon Street is a New Orleans icon. The absinthe they serve is the real thing too, not some cheap imitation. Among the oldest bars in New Orleans, the Old Absinthe Bar goes back to 1752, though it was out of commission for a few years after the building burned down. Two Spaniards brought the bar back to life and made the Old Absinthe House one of the city’s coolest bars. During the War of 1812, Andrew Jackson enlisted the help of legendary pirate Jean Lafitte, and the Absinthe House is where they had their meeting. Thanks to Lafitte, the Americans were able to drive the British out of New Orleans and once again take control of the Mississippi River. By the time Prohibition rolled around, the bar was the go-to spot in town for a drink, and for Prohibitionists, the building represented the debauchery that came with alcohol. Some radicals even planned to burn it down. But the Absinthe House survived, running a speakeasy at a nearby location. Locals say that “Everyone you have ever known or ever will know, eventually ends up at the Old Absinthe House.” The quote refers to the number of celebrities and politicians that have come through the doors of the bar, from Mark Twain to Robert E. Lee, to Frank Sinatra. Being such an old bar, it goes without saying that the Absinthe House is haunted. The ghosts of pirate Jean Lafitte, former president Andrew Jackson, and voodoo queen Marie Leveau have all been spotted. Patrons who try a world famous Absinthe House Frappe are sure to have an enhanced spiritual experience.

Beginnings of the Absinthe House

The first bar to occupy 240 Bourbon Street was built in 1752. It fared quite well for about 36 years until the Great Friday Fire of 1788, which consumed the entire city of New Orleans. The building was completely burned down. Ironically, the only part of the building that still stood was the fireplace, an eerie sight for former bar patrons.

In 1806, two men from Spain rebuilt the bar, beginning a legacy that would last centuries. Pedro Front and Francisco Juncadelia were former grocers who made a small fortune importing fine wine and tobacco products. They called the bar Aleix’s Coffee House. In those days, one went to a coffee house not just for coffee but for other vices as well. The bar became insanely popular in New Orleans, with tourists and locals alike often spending all night drinking. In 1846, Absinthe became hugely popular in New Orleans. Tourists came from all over to chase “The Green Fairy.” It was during this time when bar mixologist Cayetano Ferrer created the bar’s signature drink, the Absinthe House Frappe. The glass was a smash with the locals. So much so that the bar changed its name to The Absinthe House in 1874. A New Orleans legacy was born.

As the U.S. and Great Britain clashed over territorial rights, Major General Andrew Jackson and wanted pirate Jean Lafitte was calmly having a conversation over a few drinks in the Old Absinthe House. Jackson was coming to Lafitte for help in the upcoming Battle of New Orleans. The Americans were vastly outnumbered, and they needed all the men they could get. Lafitte had recently suffered a heavy loss to the U.S. Navy, and most of his ships were confiscated. Jackson, on the other hand, came to New Orleans to prepare the city for battle and found it dangerously undefended. Lafitte’s ships sat empty in the New Orleans harbor, with not nearly enough men to man them.

Both men were trying to gain the upper hand in the bargain, and both had a lot to lose. Jean was facing imprisonment and possible execution for his crimes. Jackson was looking at the possibility of the British establishing a foothold on American soil. Jackson would clearly walk away from the bigger loser if no deal was made, but Lafitte wasn’t going to lose his livelihood or his life. Jean made a simple request that he and his men receive a presidential pardon for their crimes. Jackson agreed.

On the day of the battle, the war had officially ended, but the news didn’t make it to New Orleans. The Americans were outnumbered, outclassed, and outgunned. But the British executed their assault poorly, and Lafitte and his men brandished their exceptional artillery skills, preventing the Brits from taking the Mississippi River. Where the American’s lost only 60 men, the British lost around 2,000. The Battle of New Orleans effectively ended the war.

As the movement towards Prohibition gained strength, those who supported the measures began to look at the Old Absinthe House as a symbol of alcoholism and debauchery. Absinthe was on the verge of being outlawed, and authorities wanted the Absinthe House closed for good. Some even threatened to burn it down. The passage of the 18th Amendment forced the bar to go underground. The bar staff moved the furnishings and famous copper-topped bar to another location on Bourbon Street under cover of night, keeping the exact whereabouts highly secret. The only way to get to the bar was to be in the know.

Ghosts of the Old Absinthe House

The entire city of New Orleans is haunted, from ghosts and vampires to witches and zombies; the Big Easy is the place to be if you’re a paranormal freak of nature. The Old Absinthe House is no different. Though at first glance, one might be easily fooled by the football memorabilia and business cards that line the walls. Don’t let your guard down! Many of the well-known patrons of the Absinthe House still swing by, even in the afterlife.

Considering Jean Lafitte helped save America from the Brits at this very bar, it would be wrong not to find him here. Locals say that he hangs on the second floor, where he had his legendary meeting with Andrew Jackson. But not only will you find Lafitte, but you’ll find his entire crew here also. He’s said to be quite the party animal, throwing some extravagant ghost parties with his men. Staff and guests have heard snippets of raucous laughter and the sound of beer mugs and glasses falling over. Witnesses say it’s like walking by an open door, peering to the past. Jean Lafitte’s ghost is never seen without his pirate hat, and some say they’ve seen Andrew Jackson hanging with the old pirate as well.

The ghost of Marie Leveau is also often seen in the bar. Being a common sight around New Orleans, it’s no surprise that her spirit would stop by for a drink or two, especially after hanging around her grave at the St. Louis Cemetery all day. Miss Leveau is usually seen sitting at one of the windows on the second floor, daydreaming and romantically gazing at the city streets below.

Other ghosts have been seen around the bar. A woman in a long white dress has been seen walking up and down the stairs. The spirit of a small child plays tricks up on the third floor. These apparitions are often accompanied by spots of cold air that send chills down your spine. The ghosts are also blamed for some strange things that are known to happen around the Absinthe House. Customers might hear unexplained whispers in their ears. Doors might inexplicably burst wide open. Bottles and chairs are moved around the bar when nobody’s looking. Some say it’s Jean Lafitte still having fun in the afterlife.

For those who choose to drink the bar’s signature Absinthe House Frappe, the hallucinatory powers of the Green Fairy might make the ghosts of the Absinthe House a little too real.

Read more about the haunted history of New Orleans!

New Orleans is known for its history, as well as being home to numerous haunted houses. Vampires and zombies call the city home too! Learn more about Jean Lafitte’s exploits at his Blacksmith Shop, which was once a front for his criminal enterprise and smuggling operation. See more of Marie Leveau’s ghost at the St. Louis Cemetery No.1, one of the most haunted spots in the city. Stop by the New Orleans Pharmacy Museum for a dose of homeopathic medicine, and catch a glimpse of the ghost of Dr. Dupas. You can also read about the top ten most haunted places in New Orleans right here!